Samargul is now 18 years-old, but since she has been 12 years-old, she has been married to a much older man than her. She was given to him as a child bride to settle a family debt, and since then has been tortured and treated horribly.[1] She has had enough now and she wants out…now she is speaking out about what has happened during her time as a child bride, in hopes that it will help her get out. 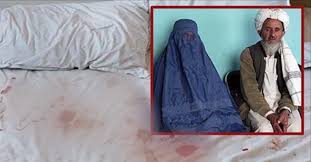 For example, six years ago, in the Zari district of Afghanistan, a 60-year-old Muslim man married a 12-year-old girl to settle a debt between the families, according to Tolo News. The young girl was the man’s third wife, and after they consummated the marriage, he showed her that her life from that point forward would be a nightmare.

The brave young woman said she obeyed her family and her pedophile husband for as long as possible, but that she could not take it anymore.

“I was ignorant, I didn’t know what was good, or what was bad, but now I want a divorce,” Samargul said.

However, her husband has no plans of letting go of his young bride, according to Rawa News.

“It has been six years since we married. She (Samargul) was with me and we didn’t have any problems,” Faiz said, who has also accused the girl of having an affair — something that can bring severe punishment, such as lashing or stoning, under Shariah law.

It is rare for a woman to be granted a divorce from her husband under Shariah law, as it requires the permission of the man — something Faiz doesn’t seem to be interested in giving.

For girls like Samargul, the only way “out” of the brutal marriage is to run away or take their own lives.

This situation is horrific, and the sad part is that Samargul is just one of millions of child brides around the world who suffer from rape and beatings on a daily basis.

It’s so easy to take things for granted. Like the freedoms that belong to everybody, but are not allowed for everybody. Here in America, we have the freedom to choose marriage and divorce, and we are protected from being child brides. The things we may be taking for granted are very literally a matter between life and death for others who were not born in such a country that protects their freedoms…and it’s sad.