A Defiant Small Town Votes To Fly Christian Flag Over City Hall; ‘It Was The Right Thing To Do’

American Christians are under attack. With a government obsessed with supporting radical secularism and/or Islam, Christianity, despite being the predominate religion in the U.S., is under attack. Now, according to a report from BizPac Review[1], those who hail a fictitious “wall of separation between church and state” are in for a rude awakening. 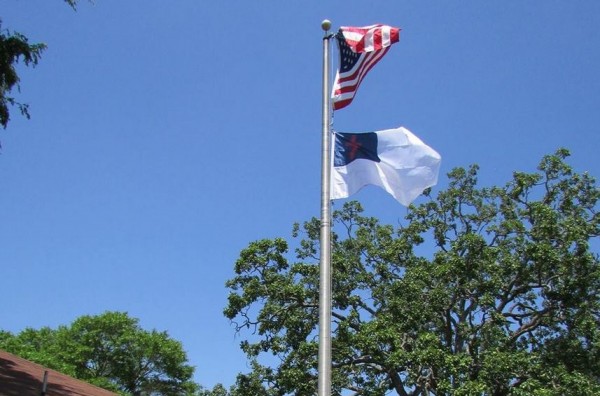 In a move that is sure to send secular progressive liberals into the stratosphere, a small Georgia town voted to fly the Christian flag outside city hall – against the advice of their own city attorney.

After hoisting the flag recently, an occasional practice, the city of Cochran, Ga., population 5,100, took it down after the city attorney counseled against the idea. But the city council voted last week 5 to 1 to put it back up, according to WMAZ[3].

After being contacted by an “informant,” Raw Story, eager to alert secular progressives, got in touch with Cochran City Manager Richard Newbern to confirm the story.

“The council voted last Tuesday, on April 14, to fly the Christian flag at City Hall,” Newbern told the liberal website. “In the past it has been flown from time to time at City Hall.”

“The attorney advised that the flag not be flown at City Hall,” he added. “But then the city council voted 5-1 to put it back up, and it’s been flying on a pole outside the building ever since.”

Councilman Gary Ates, who made the motion to restore the flag at that meeting, said it was the will of the town.

“The city manager took the flag down because an attorney said we could have a problem,” Ates said. “The people of Cochran came to a city council meeting and said ‘let’s put the flag back up.’

“It was the right thing to do.”

The flag was raised in association with a local event, “Bible Reading Marathon,” according to the city manager. An event held in Cochran since 2003 that takes place on the steps of the county courthouse.