A Night With WSJs John Fund 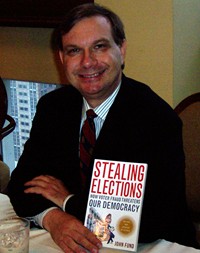 Tonight I am blogging from an evening with the Wall Street Journal’s John Fund sponsored by the Illinois Policy Institute a conservative, economic policy group out of Cook County, Illinois.

We are meeting in the sumptuous legal library at the Five Star Center at the top of 190 S. LaSalle Ave., Chicago with a commanding view of the city appearing in the large picture windows. The sun (what there was of it on this rainy day) is preparing to set and we are all milling about in welcome, convivial conversation. Having a conversation about matters conservative is not a common thing here in the Windy City, after all.

I have already purchased and had personalized by copy of Mr. Fund’s excellent book “Stealing Elections: How Voter Fraud Threatens Our Democracy,” and was gratified that this excellent writer chronicalling today’s spiral remembered me from our meeting earlier in the year. No, really. He did. Excellent memory that one.

Incidentally this is an important book for those of you out there that want to get some hard facts on how the Democrats perpetrate vote fraud. Knowing is half the battle of combating it.

In any case I expect to hear some excellent commentary on our political scene by Mr. Fund. I want to thank the Illinois Policy Institute for setting this up and inviting me to come cover it all. 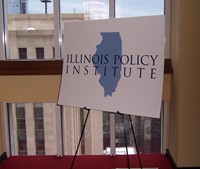 If possible I will add some more in a short time after Mr. Fund begins his address.

John had a great, inspiring speech tonight. He was amazed, for instance that President Obama made it to the White House without really being a known member of the corrupt Daley machine. But he said to make no mistake about it, the Obama administration is filled to the top with old Chicago operatives from Rahm Emanuel to Valarie Jarrett the whole upper tier of those close to Obama are Chicago political hacks.

Mr. Fund, though went on to encourage us all to strive for a return to conservative policies. He said that there will be a time in the future when we conservatives will be proud to have been part of the change for the better in America in this era.

Fund reiterated that there is a cyclical nature to American politics and that the Democrats are just about to reach their stage of overreach that will cause the American people to swing back to the right.

During the questions Fund also mentioned that many Americans, those attending tea parties, for instance, are becoming alarmed by Obama and it is driving them to respond to Democratic overreach. Common, average Americans that “normally want to forget about politics” are ready for our message.

Fund reminded us all that most Americans think of politics in terms of up or down, instead of right or left. That they get involved when their freedoms are threatened and now is that time.

When asked who our leader is, Fund says he is not a Republican and has never associated with those “so moderate” because he’s a “radical.” This got a great laugh, but he’s saying that we need to think outside the box (my words not his) and look for leaders who are not the “next person in line” in the Republican machine.

“You are the voice of the new politics,” Fund says using the tea party/townhall movement as an example. He tells us that WE should seize the power. That we have the chance to discover who the next leader “should be” instead of being stuck with the next guy in line. Fund is enthused that we are at a time when being leaderless is a good thing because we can discover that next leader through the “process of competition.”

Fund had some great points to make and I was so pleased to have been a part of this night. Thanks again to Richard Lorenc and the Illinois Policy Institute for inviting me tonight.