Adoptive Mother Reveals How She Nursed 3 Year Old, Who Weighed Just 19 Pounds, Back to Health While Her Biological Parents Were Detained After A Year On the Lam

After being starved by her biological parents, Zoey was placed into the care of Amy and Victor Arellano. When they first adopted the little girl, she was so traumatized that she would sleep with food and nab scraps from trash cans. Luckily, the girl is now happy and healthy, and her abusive parents are behind bars.[1] 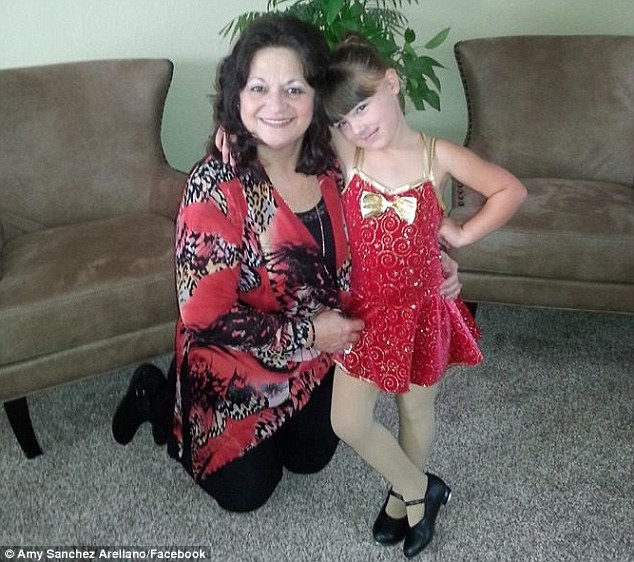 When 5-year-old Zoey was first adopted this summer, she slept with slices of pizza and horded scraps of food from the trash can, still traumatized by the years of starvation at the hands of her biological parents.

Two years ago, Zoey and her two siblings were taken away from biological parents Kenny and Kathleen Sanchez, when a Colorado police officer noticed the then 3-year-old’s skeletal frame – severely underweight at just 19 pounds.

Zoey is now healthy and no longer afraid her food will be taken away from her, seven months after moving in with adoptive parents Amy and Victor Arellano, 9News reports

The little girl’s recovery now has an even better ending, as her heartwarming story broadcast around the nation on Wednesday led to the arrest of her biological parents, who have been on the run for the last year and a half.

The Sanchezes were first arrested in February 2012, when an off-duty Boulder, Colorado police officer witnessed Zoey’s father hit her in the face in a store when she was hysterically crying out of hunger.

The concerned officer said in a police report that Zoey had ‘sagging skin, protruding bones and visible ribs’. He reported the incident to local police and continued to follow the family, including Zoey’s then 4-year-old brother and 2-month-old sister Madison, until the parents were arrested.

Kenny Sanchez told responding officers that his daughter was ‘crying uncontrollably because she was hungry’ and refused to stop even though he promised to get food ‘as soon as they were done shopping’.

He says he only hit her in the upper left leg ‘to get her to stop crying’, but responding officers noticed ‘numerous bruises and scratches’ on the girl they described as ‘malnourished’.

Zoey was taken to the hospital for evaluation where doctors also found multiple bruises and healing scratches on her body and face.

‘They also noted that the victim was extremely malnourished to the point that it was likely to affect her organs,’ according to the affidavit.

The parents explained Zoey’s weight by saying she had an eating disorder, and had seen doctors in Florida for the issue. While there is evidence Zoey did see out-of-state doctors, it was revealed that her parents did not bring her for follow-up visits.

God bless this little girl and her sister, and the adoptive parents. The biological parents deserve to go away to for a very very long time and should be subject to the same horrid treatment they inflicted on their innocent little girl.
Endnotes: