ALERT: Major Illegal Alien Surge at the Border… and You’ll Never Guess Why

Trump’s Vow to put a stop to illegal immigration has them swarming in by the tons! Liberals are loving this, their votes are on the rise. Can we do anything to stop this before it’s too late?[1] 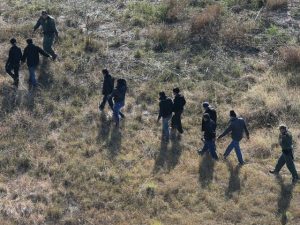 “They think they need to take advantage while they can,” Blanca Rivera, a manager of the Ciudad Juarez migrant shelter, told Reuters. Rivera noted that she has seen the recent increase in northward migration.

According to Reuters, between October and February Customs and Border Patrol apprehended 150,304 people attempting to illegally enter the U.S. via the southern border, about 24 percent more than the same timeframe last year. Additionally, the number of unaccompanied minors detained illegally entering the U.S. from October to January — 20,455 — is up by over 100 percent compared to those same months last year.

Interviews with migrants, people smugglers and officials show many migrants are trying to cross now instead of facing tighter policing and new policies to halt illegal immigration if Trump or another Republican wins the Nov. 8 election.

“If Trump wins, we’re all screwed and all Latinos are screwed,” Isaias Franco, a 46-year-old from El Salvador who was deported from the United States late last year and is now trying to get back, said at a migrant shelter in Ciudad Juarez, just across the border from El Paso, Texas.

Reuters reports that while illegal immigrants say they are concerned about a possible Trump presidency, the U.S. remains a better alternative their countries of origin.

A Guatemalan woman whose parents were deported back to Guatemala, for example, told Reuters that she is pushing her parents to return to the U.S. in case Trump is elected.

“He’s one of the reasons why people are crossing the border. They think he looks like a dictator,” Brenda Barrios told Reuters. “It’s very dangerous for them to cross. But it will be worse if Trump is president … Life will be very difficult for us. He doesn’t want us here.”

The outlet notes that so-called “coyotes” or human smugglers are also telling people that they need to get into the U.S. sooner rather than later.

How effectively will we be able to weed out all of the illegal immigrants now that they are flooding our country? The wall isn’t in place yet, do we have cause to worry?