Whisper campaign regarding the number of people who suffered mysterious deaths associated with the Clinton’s is about to grow stronger! Will THIS New evidence regarding the 23-year-old mystery [1]surrounding Deputy White House counsel Vince Foster’s death reveal an ugly murder cover-up leading back to the Clinton’s? 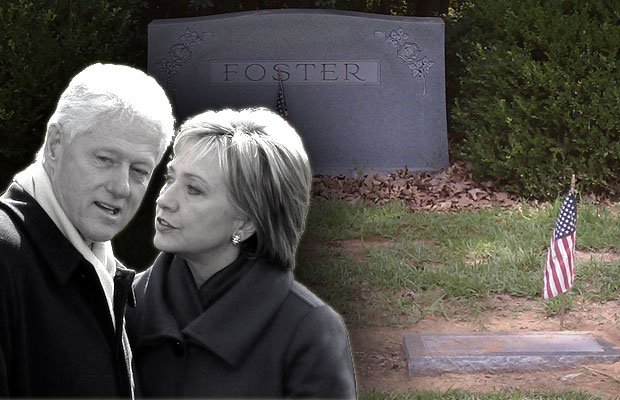 Documents that might blow the lid off the suicide theory included a two-page resignation letter written by Independent Council Kenneth Starr’s lead prosecutor, Miguel Rodriguez.
In his resignation letter, Rodriguez refers to photographs showing a wound on Foster’s neck — a wound that did not exist according to Starr’s official account.
In his resignation letter, dated Jan. 17, 1995, Rodriguez said he was resigning because important evidence in the investigation was being overlooked in a rush to judgment in favor of suicide and a desire to close the grand jury investigation.
Rodriguez also explained that after he produced the photographic evidence, he became a target and was internally investigated.
“I steadfastly maintained, and continue to maintain, that I, at all times, conducted myself as an experienced and trained prosecutor, with years of federal prosecutorial experience and federal grand jury experience,” he wrote.
Rodriguez mentioned 12 ways in which the case was compromised, including the mishandling of the photographs. The FBI claimed some of the photos of Foster’s neck wound were underexposed and therefore useless but when Rodriguez found them and hand them enhanced, he was shocked to learn a blurred-out spot was described as a bullet wound.
The suicide has always been troubling for other reasons. The car Foster’s body was supposedly discovered in was not seen at the park by Patrick Knowlton, who was supposedly at the park just an hour before Foster allegedly committed suicide. In addition, Foster’s fingerprints weren’t found on the gun he supposedly used and the autopsy report did not include X-rays of Foster’s body.
Conspiracy theories aside, the photographic evidence discovered is enough to warrant serious questions. It leads to many unanswered questions beginning with Clinton’s role in past scandals that include Whitewater and the White House Travel Office.

There is a list out there of people the Clinton’s were associated with who are dead. It’s a pretty big list. Some people say that Clinton’s have a special way of getting rid of their threats… but until now there was NO evidence to prove it. Will this be enough to start a real investigation into the shady dealings of the Clinton family?