VIDEO: Allen West: “We Must Find the Enemy, Kill Them and Pursue Them to the Gates of Hell”

Allen West, who has never been accused of sugarcoating anything he has to say, had some strong words for the government. He insists that “we must find the enemy, kill them where they are, and pursue them to the gates of hell.”[1] 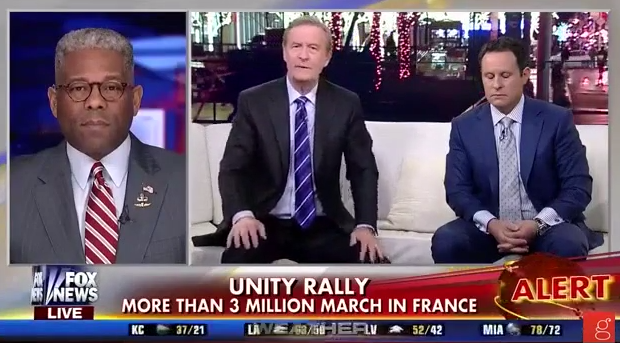 “Missing the rally per se isn’t the problem. Most of the leaders marching are the worst offenders of free speech. The reason Mr. Obama missed the rally is the real question and we don’t know for sure what that reason is.

No one would care at all if Obama had some kind of strategy to deal with radical Islam but he won’t even call it radical Islam.

Not only did Obama not attend, but Eric Holder who was in Paris, missed it too. Holder flew out before the rally. That’s a message!

The fact is the winds of change are blowing and Obama is standing with the radical Muslims. Check out the 28 times Obama showed his preference for Islamists. Maybe he didn’t want to visit the Jewish deli and look as if he were taking sides.

If we want to see real leadership, we have to look to Egypt’s President el-Sisi or Israel’s Prime Minister Netanyahu.

Oh, by the way, did anyone notice the 2,000 Nigerians, mostly women and children, murdered by Boko Haram? When is the march schedule”

You can watch Allen West on Fox & Friends:

Well that was pretty clear, wasn’t it? This, ladies and gentleman, is why Lt. Col. Allen West should be in charge our national defense.