AMAZING: Loon Attempts to Shoot Up Church – Here’s How the Church Congregation Stopped Him

“Gun-free” zones are inherently immoral. They are advertised areas where people are left vulnerable to the attacks of madmen. One church was not a “gun-free” zone and as a result, when a lunatic tried to massacre worshippers, a gun-packing churchgoer fought back.[1] 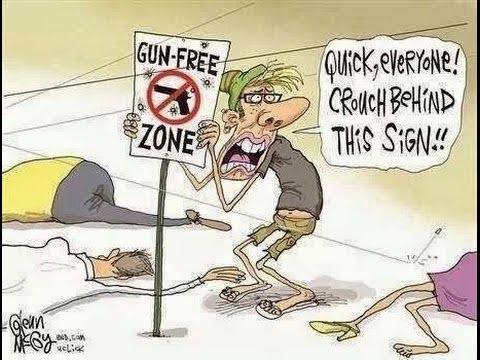 Last week, President Obama delivered somber remarks in the aftermath of the mass shootings at Umpqua Community College[3] near Roseburg Oregon. “The reporting is routine,” Obama said. “My response here at this podium ends up being routine, the conversation in the aftermath of it. We’ve become numb to this.”

In some regards, he’s right. CNN[4] reported Obama’s now delivered statements regarding domestic gun violence 15 times in his near 7 years in office. By any standard – liberal, conservative or ‘other’- that’s 15 times too many.

But there’s a stunning gap in presidential time-and-again remarks, a flaw in liberal logic so screechingly loud that any and all can see it — but that liberals refuse to acknowledge. Liberals like Obama continually call for an imposition of more “gun-free zones” despite the facts that a) no such thing exists, and b) about the only places we see these mass shootings happening is in these very “zones.”

Of the more recent shootings that have captivated headlines, many have occurred in posted “gun-free zones” Columbine High School[5] in Littleton Colorado; Virginia Tech University[6] in Blacksburg Virginia; Fort Hood, Texas[7] and Chattanooga, Tennessee, like all U.S. military bases; Century 16 Cinema[8] in Aurora, Colorado; and Sandy Hook Elementary School[9] in Newton, Connecticut. On and on it goes.

BUT. There’s one would-be mass shooting and mass shooter you never hear mentioned. That’s because it never happened.

With over 10,000 congregants, New Life Church[10] in Colorado Springs, Colorado is a “mega church.” Its main sanctuary seats over 5,000 and is packed for most services. Add to that another huge youth sanctuary; chapels for children from infants through junior high; staff; and people hanging around the café, etc. — and you have a very target-dense building.

On December 9, 2007, at approximately 1:00pm, Matthew James Murray[11] walked into New Life with enough armaments and ammunition to kill dozens, if not hundreds, if he were an accurate enough shot. The 11:00am service had just let out. People were everywhere. Murray shot and killed two in the parking lot then entered the building. That’s where his rampage ended. Unfortunately for Matt Murray, New Life Church was not a “gun-free zone.”

Once in the building Murry ran across Jeanne Assam[12], a woman with a concealed weapons carry permit, trained in the handling and use of firearms — and she was packing heat. Ms. Assam assessed the situation, pulled out her pistol and dropped him.

Matt Murray entered New Life Church that Sunday intent upon killing; however, in the final analysis, only one person was shot and killed inside New Life that day — the shooter himself, Matt Murray.

No one knows how many lives might’ve been lost had New Life Church been a “gun-free zone.” But we do know this, no President went on national TV that night talking about the need for more “gun-free zones” to help curb our “culture of gun violence,” yadda, yadda yadda. Why? Because rather than sit and wait her turn to be executed, Jeanne Assam was able to defend herself and those around her.

Imagine how many would be alive today if we had not more, but fewer, “gun-free zones.”

Guns save lives. When trouble occurs, we call the police and hope and pray that the “good guys with guns” make it in time to save lives.