Ambassador Stevens’ URGENT Emails Leading Up To The Benghazi DEATHS Will Give You CHILLS; Gowdy Says Nobody Cared

Countering claims that the House Select Committee on Benghazi is unearthing nothing new, its chairman, Rep. Trey Gowdy, indicated that none of the previous seven committees had bothered to obtain the late Ambassador Chris Stevens’ emails.[1] The details of these emails Gowdy shares, will SHOCK you… 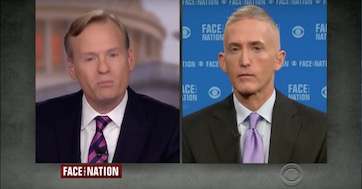 “How did they miss Ambassador Stevens’ emails? None of the seven previous committees bothered to access the emails of our ambassador,” the South Carolina Republican told CBS News’ “Face the Nation” host John Dickerson, Sunday, at about the 4:30 mark.

“If you want a window into Libya and what was happening in the weeks and months before these four were killed, why would you not look at the Ambassador’s emails?”

Gowdy indicated that the emails showed that Stevens began requesting additional security almost from the day he arrived in Libya, on June 7.

“And on one occasion, he even joked in an email ‘maybe we should ask another government to pay for our security upgrades because our government isn’t willing to do it.’ So if you want to know what’s happening in Libya, you have to look at his emails,” Gowdy said.

He was puzzled why then-Secretary of State Hillary Clinton, who is scheduled to appear before the committee Thursday, received numerous intelligence updates from Clinton confidante Sidney Blumenthal, but apparently ignored Stevens’ reports.

“I want to know why certain things made it to your inbox, Madam Secretary, but the plaintive pleadings of our own ambassador, that you put in place, for more security never bothered to make it to your inbox,” said Gowdy.

Watch the interview, via CBS News.

It is easy to believe after this, that the Democratic party, may in fact, have no conscience whatsoever.