An American pastor who has been serving a prison sentence in Iran for “undermining national security is apparently suffering from horrible torture methods while in prison[1]. 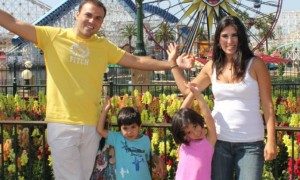 “American Pastor, Saeed Abedini, has been held in prison in Iran since 2012. Abedini, who was born a Muslim but converted to Christianity was sentenced in 2013 to eight years in prison supposedly on charges of “undermining national security” in Iran because he was holding private religious gatherings in Christian homes.

He has not seen his family in three years. The Obama administration has seemingly made little to no effort to free him – even while they sit across from his captors, attempting to negotiate a deal.

“Last week had been quite difficult for Saeed. He has been under a lot of pressure and attack from the hardliners. The guards have also been threatening Saeed that he will never go free and additional charges (and years) will be added to his sentence (which they have done to other Christians and fellow inmates). They continually threaten Saeed that the only key to his freedom is denying Christ and returning to Islam. Saeed refuses to deny Christ and continues to be a light and witness in that dark prison. These threats coupled with the fact that there have been mass executions during the last week in Rajayee Shahr prison, have really taken their toll on Saeed. He asks for prayer for continued strength.”

My question is simple: where is President Obama in the middle of this crisis? Will he fulfill his commitment to do “everything we can to bring him home?”

President Obama made this vow publically this year at the National Prayer Breakfast. Yet, Pastor Saeed is still held captive in an Iranian cell, tortured for his faith daily.

Fox News [4]reports that President Obama met with Pastor Saeed’s wife and two children also this year, telling them that her husband and their father’s freedom was a “top priority.”

Correct me if I’m wrong, but it seems Obama’s ‘top priority’ was to sign a “deal” with Iran and release the “Taliban Five” for an Army deserter — yet he will not lift a finger to free an imprisoned American pastor and father.”

Now if Netanyahu was holding a pastor captive, I am sure that Obama would have a lot to say about it.  Unfortunately, President Obama is more interested in sealing a deal than he is in holding Iran accountable to a single human rights violation.  Prayers for Saeed and his family that he is released soon.