The Mengeles at Planned Parenthood remain under fire as a pro-life group continues to release damning videos of Planned Parenthood officials candidly discussing their butchery for profit. Now, they have released a third video[1] and, unsurprisingly, the leftist media is circling the wagons. 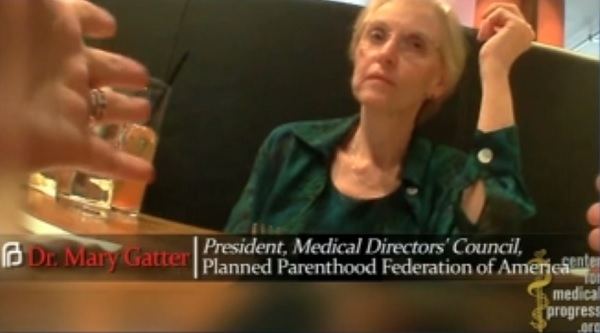 The anti-abortion group targeting Planned Parenthood released another video Tuesday, this one featuring an interview with a woman who says she worked in a clinic procuring tissue from aborted fetuses.

Meanwhile, Senate Republicans said they would schedule a vote on a bill in the coming days that would restrict federal funding to the organization.

The video, which is heavily edited, was made and released by The Center for Medical Progress, which made national headlines earlier this month when it began releasing undercover videos of Planned Parenthood officials talking about the selling of fetal tissue.

The latest undercover video — the third the group has released — shows a Planned Parenthood official in Denver discussing per-organ pricing.

“I think a per-item thing works a little better, just because we can see how much we can get out of it,” the official says.

The video also includes an interview with a phlebotomist, a person who draws blood for clinical testing, who worked for a company that procured fetal tissues from Planned Parenthood.

“For whatever we could procure, (Planned Parenthood) would get a certain percentage. The main nurse was always trying to make sure we got our specimens,” said Holly O’Donnell, the phlebotomist. “No one else really cared, but the main nurse did because she knew that Planned Parenthood was getting compensated.”

Planned Parenthood has said they did not break any laws and have argued that the videos’ heavy editing take the conversations out of context. They have not yet commented on this latest video.

The organization called the undercover video tactics “profoundly offensive violation of privacy and dignity” in a statement issued on Tuesday.

“Publicizing secret video footage of a woman’s abortion process is a grossly offensive act that should be rejected by all regardless of political perspective,” said Dawn Laguens, the executive vice president of Planned Parenthood, in the statement. “We are doing all that we can to upgrade our extensive security systems and to foster an environment in our country where providers of essential women’s health care and their patients are not subject to threats, harassment and intimidation.”

Earlier Tuesday, Laguens told Alisyn Camerota on CNN’s “New Day” that the organization does not profit from the sale of fetal tissue.

“I say that unequivocally,” Laguens said. “We do not make a profit on fetal tissue.”

A bill sponsored by Sen. Rand Paul, R-Kentucky, on Tuesday gets right to the point: “Notwithstanding any other provision of law, no federal funds may be made available to Planned Parenthood Federation of America, or any of its affiliates.”

Senate Republicans met in McConnell’s office for about an hour Tuesday to work on the Planned Parenthood funding issue. Senators said afterward while they have not resolved their differences on how to tackle the funding issue, they expect an announcement could be made as early as Tuesday night or tomorrow.

“The details are being sorted out right now. I think we’ll know in the next 24 hours exactly what the details are. But I think the big news of the day is that there will be a vote on defunding Planned Parenthood,” said Paul while leaving.

One GOP source familiar with the direction of the legislation, said it is likely to remove funds from Planned Parenthood and then redirect them to other groups that deal with women’s health.

Another Republican said there is some concern that the original bill offered by Paul was too blunt — a simple ban on federal funding. But that could hurt poor woman who go to Planned Parenthood for non-abortion related health services.

An aide to McConnell told CNN that while Paul’s bill simply forbids federal funding for the organization, some Republicans want to direct that money to other organizations that deal with health care issues for women but don’t provide abortions.

Republicans believe such a proposal might win support from enough Democrats to get over the 60-vote threshold, the aide added. But it could delay action on Paul’s bill into some time next week. However, Senate Democratic leader Harry Reid immediately panned the idea, saying he didn’t expect it to pick up enough Democratic support to succeed.

It’s unlikely the House would take any action before it leaves for a month-long recess, which is scheduled to begin Wednesday.

Paul, meanwhile, claimed credit for getting action on the legislation.

“Sen. Paul has been a leader in the movement to protect life and has acted swiftly and decisively to end the taxpayer funding of Planned Parenthood,” his campaign said in a statement.

But Planned Parenthood released a statement of its own Tuesday afternoon.

“It’s outrageous, not to mention wildly unpopular, that politicians are using this widely discredited attack against Planned Parenthood to push through legislation rolling back women’s access to healthcare … This failed in 2011 and it is going to fail again,” the statement said. “The vast majority of federal funding Planned Parenthood’s non-profit health centers receive is reimbursement for Medicaid visits — and the rest goes to things like teen pregnancy prevention and evidence-based sex education.”

The event, #WomenBetrayed, is one of several being held across the country this summer that are sponsored by the “Students for Life of America.”

“The fact of the matter is it’s much more sophisticated than these little creatures that the Environmental Protection Agency is trying to save,” said Carson, accusing the government of saving snails but not human lives. “Why don’t they spend their time and effort trying to save a human life?”

He added that abortion “is blatant evil going on in our society.”

“I call upon the United States Congress right now, today, to stand up and lead to defund Planned Parenthood,” Cruz said.

The left maintains that the film is edited. I would think so. However, the exchanges appear relatively intact. It was not chopped into singular words or sentences, but complete statements that explicitly discuss the selling of baby parts and the means in which they retrieve these parts without damaging them (while still killing the baby).

Have you had enough of these butchers yet?