Anti-Islam vs. Black Lives Matter Ends in Chaos as Heavily Armed Protesters Face Off in Dallas

Thanks in part to a heavy police presence, a planned demonstration by armed members of the group BAIR — the Bureau for American Islamic Relations — went off peacefully, despite a counter protest organized by a group called the Huey P. Newton Gun Club that included members of the street gangs the Bloods and the Crips, as well as elements of Black Lives Matter. Thank goodness it did:[1] 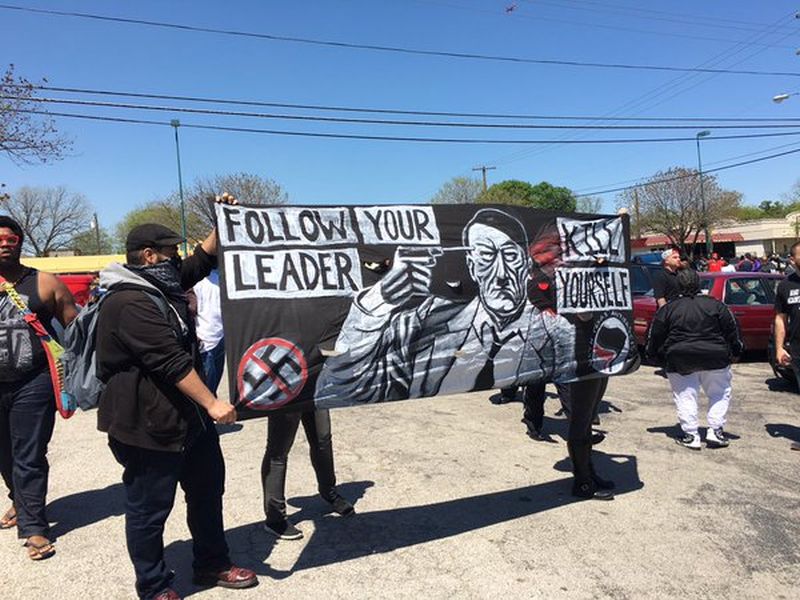 As the event ended, an angry mob of black protesters advanced on the BAIR members, and frantic Dallas police ordered the group to evacuate immediately.

Both members of BAIR and the Huey P. Newton Gun Club were openly armed, primarily with long guns.

As this exclusive video from Breitbart News shows, members of BAIR came to South Dallas to protest the local mosque connected to the Nation of Islam, a group that they call “a domestic terrorist group.” Leaders of BAIR said their concern with the Nation of Islam is part of a larger concern that leaders of mosques around the country may have ties to terrorism and the Muslim Brotherhood. the BAIR group was also demonstrating to show their support for the police, who have come under heavy fire from activist groups like Black Lives Matter.

The members of BAIR assembled at noon on Sunday to begin putting together gear and ammunition and suiting up for the process. The group then traveled to South Dallas, where the police had already put together a significant presence, including barriers, dozens of officers, and a helicopter to help maintain order.

Part of the motivation for the police presence was a counter demonstration put together by the Huey P. Newton Gun Club, a leftist group from the area that follows the philosophy of the late Black Panther Party leader, who believed in putting together “armed cadres” to monitor the police. Newton himself, who was shot to death in front of a crack house in the 1980s, was arrested for killing police officer John Frey in 1967, although that conviction was later overturned on a technicality.

The police kept the BAIR protesters penned up about 100 yards from community members, many of whom were shouting angrily and accusing the group of being the Ku Klux Klan, a group that BAIR has no known connection to.

That false belief angered the crowd and was being spread by local Nation of Islam and Black Lives Matter groups, says BAIR director David Wright. Wright says the group is concerned with Islam, not race issues but that the lie was spread to get non-Muslim black residents to support the protest.

Most bystanders appeared to have no idea why BAIR was protesting, although one black community member that spoke to Breitbart News said that he thought the group’s demonization of the Nation of Islam represented an attack on religious freedom.

What do you think? Is this an outrageous display of entitlement by #blacklivesmatter? Sound off in the comments below!

Written by Katie McGuire[7]. Send your hate mail to the author at [email protected], or feel free to mean tweet me at @GOPKatie[8], where I will be sure to do very little about it.