Apple’s CEO Tim Cook Is the ‘Scary’ One, Not Indiana’s Religious Freedom Law 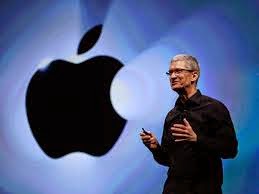 For those who didn’t know, Apple CEO Tim Cook[1] is a Homosexual.

Apple CEO Tim Cook has taken to The Washington Post to tell the nation that, in the words of the headline[3], “Pro-discrimination ‘religious freedom’ laws are dangerous.”

Notice the scare quotes around “religious freedom.” But the reality is that the only person in favor of discrimination in this debate is Tim Cook.

It is Tim Cook who favors laws that discriminate against people of faith who simply ask to be left alone by government to run their businesses and their schools and their charities in accordance with their reasonable belief that marriage is the union of a man and a woman. It is Tim Cook who would have the government discriminate against these citizens, have the government coerce them into helping to celebrate a same-sex wedding and penalize them if they try to lead their lives in accordance with their faith.

Cook opens his op-ed by claiming the Indiana Religious Freedom Restoration Act is part of a spread of evil across the nation: “There’s something very dangerous happening in states across the country. A wave of legislation, introduced in more than two dozen states, would allow people to discriminate against their neighbors.” This is simply false.

As Sarah Torre and I explained last week[4], Indiana’s religious freedom law protects citizens from government coercion—it places the burden of proof on the government if it is going to violate liberty. For over 20 years, the federal government has lived by this standard—the Religious Freedom Restoration Act passed unanimously in the House, with 97 votes in the Senate, and was signed into law by Bill Clinton. Twenty states have passed this law. And eleven additional states[5] have religious liberty protections that state courts have interpreted to provide a similar level of protection.

So, in total, the federal court system and 31 state court systems enforce this level of protection. Why is Tim Cook suddenly opposed to it?