Armed Robber Thinks He Has The Upper Hand — Female Cashier Says … NOT TODAY! 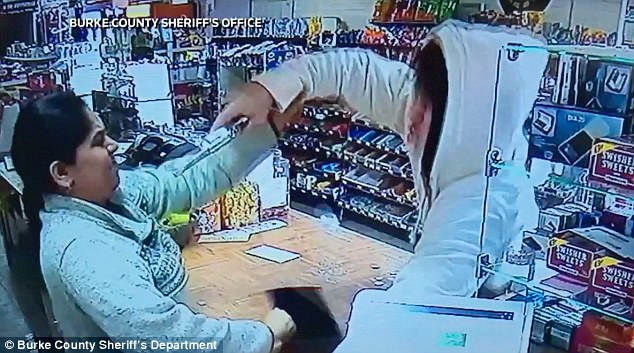 [1]If you were working as a cashier, and a thug pointed a gun at you demanding money or he’d shoot, what would you do? Most people would probably turn over the cash and hope to have their life spared. Not this young, slight woman.[2]

Cameras behind the shop counter show the would-be thief staring directly at the lens as he purchased a fizzy drink from cashier Bhumika Patel at the store in Georgia.

As she pulls open the till, the robber, 17-year-old Christian Thornton, brandishes a gun from underneath his hoodie and points it directly at her.

Undeterred, the brave shop assistant grabbed the gun pointed at her head and then wrestled with Thornton who tried to snatch the cash drawer.

But the quick-thinking employee got the till back and used it to smack Thornton over the head.

Panicking, the robber dashed out of the store as Patel pursued him with a hammer.

The shopkeeper does not stop trying to wrestle his gun from him, and at point even told the would-be robber to go ahead and shoot her if he wanted to. While we don’t recommend reacting like this for everyone, we must commend this young woman for her bravery. Prosecutors charged 17-year-old Christian Thornton with attempted armed robbery, aggravated assault and possession of a firearm during a crime. Watch the dramatic footage below.