If you’re going to attempt “armed” robbery[1] of a business, you might want to make sure that none of the people inside are packing. Since that’s impossible to do unless you frisk every single person, you’re probably better off just staying home and watching ‘Friends’ reruns. 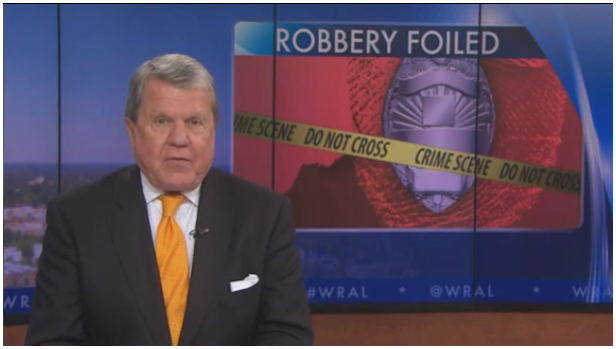 A man armed with what looked like a semi-automatic rifle picked the wrong restaurant to rob when he walked into the place where 70-year-old Vietnam veteran Phillip Brooks had hoped to have a quiet breakfast.

Early on Saturday morning, the feisty veteran was about to eat breakfast at a Waffle House restaurant in Fayetteville, North Carolina, when a man rushed in carrying what looked like an AK-47-styled rifle and announced he was going to rob the place.

But Brooks was not having any of it and picked up his walking cane to give the robber a lesson in law and order.

“He ran up to the cash register, started demanding the money – ‘Give me all the money in the drawer. Open the drawer,’” Brooks told WRAL TV[3].

Brooks then noted that customers scurried for safety. One woman even ran with her children to the restrooms.

Police 911 audio captured one of the customers calling for help: “We’re in the Waffle House on Reilly Road, and there’s a guy who’s trying to rob here, and he has a really big gun,” a woman’s voice said.

But Brooks had a sharp eye and realized the “gun” the punk was carrying was a reproduction and not a real, live-firing rifle.

“This thing was wood almost all the way up to the end of the barrel. No trigger guard, no trigger,” Brooks said. “All the working parts were missing, so I just told the girls, ‘Don’t give him anything. That’s a fake gun.’”

“My first three years, I was in the infantry,” the veteran told the media. “I did two tours in Vietnam, so I got to see a lot of AK-47s.”

Brooks then said the would-be robber yelled out “I’m for real,” but Brooks had news for the crook…

“I showed him how real I was,” Brooks said Friday with a chuckle. “I hit him in the nose with my cane.”

After that witnesses say the two paired off and began using their devices as dueling weapons with the wannabe robber using his fake gun like a club to strike back at Brooks while the brave elderly veteran used his cane to parry any attacks.

Finally several other customers got their own blood up and joined in forcing the punk to decide retreating was the better choice and he ran away.

The suspect is being described as “black, with a light complexion, a thin build and dreadlocks. He was about 5 feet, 10 inches tall, is believed to be between 18 and 25 years old and was last seen wearing a black-and-gray hooded sweatshirt with a red hooded sweatshirt underneath, gray pants and a yellow bandana over his face.”