You’ve probably heard by now that California is about to run out of every drop of water they’ve ever had ever. At least it seems that way if you listen to the Democrat. And while you’re listening to them, you’ve probably heard that it’s all your fault and you need to tighten your belt, despite the government having taken no action[1] to prevent this crisis. Assemblyman Tim Donnelly took to Breitbart.com[2] with his thoughts on this subject. 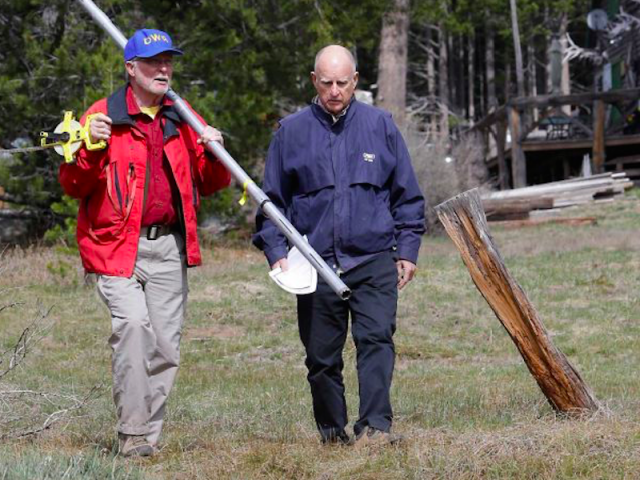 Instead of building dams, reservoirs and fighting to preserve every drop of water he can for Californians, Jerry Brown has chosen to waste his political capital on a train that no one wants, which California can’t afford–and he’s stealing people’s land and closing down businesses in order to do it. And now, finally in his fifth year as governor, he finally decides to act on the drought—and, in quintessential Jerry Brown style, he blames those who have nothing to do with creating the crisis and threatens to penalize them if they don’t comply.

Remind you of how he dealt with Sacramento’s addiction to overspending?  Right—he blamed us, raised our taxes and threatened to cut our kids’ favorite programs in our schools if we didn’t comply and vote to raise our own taxes again.

In case you missed the news, Gov. Jerry Brown has decided that in spite of his unwillingness to act, you are the problem, so he’s declared a state of emergency in order to grant government even more sweeping control over your life.

Never forget the mantra of the guru of leftists like Brown, or Rahm Emanuel, in the Saul Alinksy tradition: never let a good crisis go to waste, and if you don’t have one, create one.

So in response to Jerry Brown’s massive mismanagement of our most precious natural resource—water—the governor has ordered you to conserve 25% or there will be hell to pay.  Mandatory conservation or you will face fines or even have your water cut off.

Not dams, not water storage, not desalinization and God forbid, not cutting off those damned fish, who require us to flush millions of acre feet out to sea.  It’s you who needs to change.

No more green lawns, no more long showers, heck–you better not even brush your teeth or flush the toilet but once a week, just to be safe.  The government wants you to cut your water usage and presumably your water bill by 1/4.

Funny how the politicians couldn’t cut their spending by 10%, let alone 25%, but they demand you do what they could not.

In typical politician fashion, Brown blames the people who are simply trying to live their lives for his shortcomings. I don’t know how anyone can live in California any more.