Nina Pham is one of two nurses who contracted the deadly Ebola virus after treating Liberian national Thomas Duncan, who lied his way into this country with the deadly disease. She was recently declared Ebola free and made a statement upon her release from the hospital that made atheists absolutely crazy[1]. 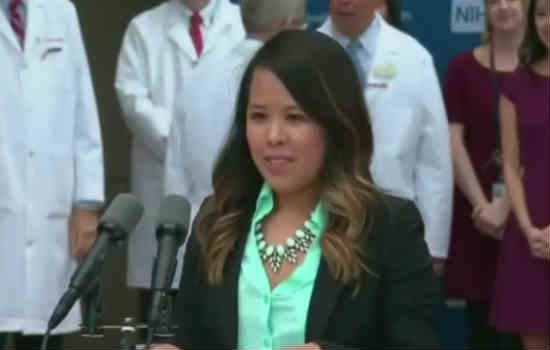 An obvious person of faith based upon this statement, Pham said, “I feel fortunate and blessed to be standing here today. I would first and foremost like to thank God, my family and friends. Throughout this ordeal, I have put my trust in God and my medical team. I am on my way back to recovery, even as I reflect on how many others have not been so fortunate.”

She also thanked those around the world who were praying for her, noting that she believed in the power of prayer. Pham said, “I believe in the power of prayer because I know so many people around the world have been praying for me. I join you in prayer now for the recovery of others.” Her words of thanks and gratitude, and her determination to pray for others suffering from Ebola, brought the atheists and other haters of religious faith out in attack mode against her.

Yes, prayer is powerful. But can someone please remind Nina Pham that modern medicine & many incredibly talented MDs & RNs helped heal her??

How about some credit for science, which saved your life? RT @USATODAY[4]: "I believe in the power of prayer" — Nina Pham, now cured of Ebola.

Nina Pham…"I believe in the power of prayer." Sigh. pic.twitter.com/8EEPZeHenz[6]

Atheists DO NOT believe in free speech or open ideas. If you don’t stand with them, you don’t have a right to speak.