AWESOME VIDEO: Hiker Gets the Shock of a Lifetime When the Volcano He’s Filming Erupts

A man identified as Walter Witt on YouTube was strolling along, filming the natural wonders of Chile, which included the 6,5oo foot-high Calbuco volcano, when the serenity of the moment was shattered. The volcano, which had been dormant since 1972, blew her top in camera[1], much to the surprise of the hiker and the scientists who hadn’t predicted this eruption. 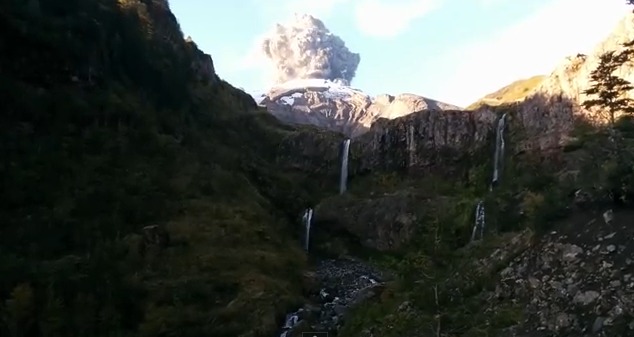 A hiker exploring Chile’s natural wonders got the shock of his life on Wednesday afternoon when a volcano erupted before his eyes.

A man identified as Walter Witt on YouTube was casually filming a serene forest with gentle waterfalls a short distance away from the foot of the 6,500-foot-high Calbuco volcano.

Since being posted online the video has over 72,000 views.

‘There aren’t many people here,’ the hiker says in Spanish in the video.

‘Wow,’ he then says with shock as he pics up his camera and travels as far away from the erupting volcano as he possibly can.

The Volcano has been dormant since 1972 and neither scientists nor government officials predicted the eruption, reports Mashable.

Volcano Calbuco, believed to be among the three most dangerous of Chile’s 90 active volcanoes, had erupted for the first time at 6pm local time on Wednesday.

This is one of those once-in-a-lifetime events that is almost impossible to duplicate. It does make an interesting story to tell the grandkids, though!