Baby Falls Out of Moving Car. What Happens Next? OMG… 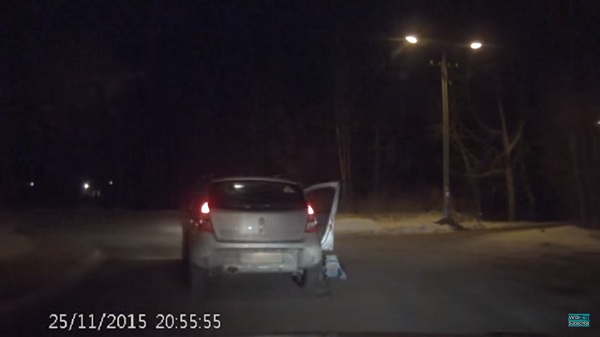 A Russian dashcam caught the moment a baby fell out of a moving vehicle.

From jet plane crashes[3] to meteorites-that-might-be-missiles[4], Russian dashcam footage is the place to be when it comes to viral videos. Hence why the most shocking thing about the clip below is that the infant appears to be in good health.

Sure, the little tike takes a spill from a moving vehicle, but (a) the car wasn’t driving very fast and (b) the kid was wearing extra padding due to the colder weather currently being experienced in the country. If anything, it seems like the little guy or girl had fun while flying out of his guardian’s SUV.

No, seriously. What kid would wave to a concerned adult after tumbling out of a moving car? This little girl or guy, obviously.

When she was a child, my mother flew out of a moving car when the door against which she was leaning flew open going around a curve.

However, that was “back in the day” before seatbelts were regularly used. This is a modern car with, presumably, modern safety features. What the hell happened and why is this child so calm in the aftermath?