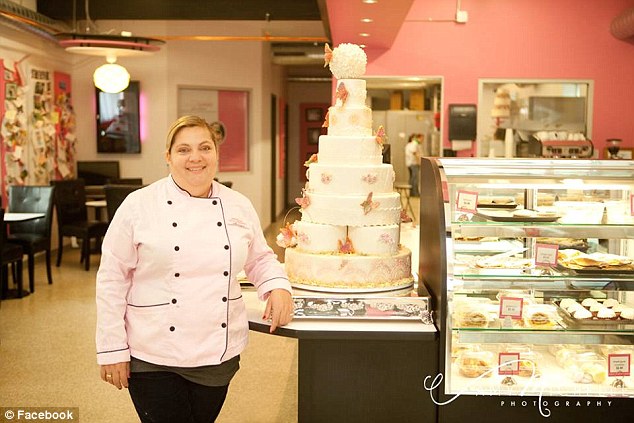 [1]In a bizarre twist to the current crop of complaints being filed against bakers for refusing to make cakes for homosexual weddings, a baker is being attacked for refusing to make a cake featuring a drawing of two men with an “X” over them, with the words “detestable” and  “God hates homosexuals.” Owner Marjorie Silva of Azucar Bakery in Denver, Colo., has found herself in the center of the controversy over bakers and gays. [2]

Silva believes the man may have targeted their firm deliberately after she made pro-gay comments to a Spanish-speaking news agency.
‘We make [Christian-themed] cakes all the time,’ she told Out Front. ‘No problem at all.’
‘He wanted us to write God hates… just really radical stuff against gays.
‘He wouldn’t allow me to make a copy of the message, but it was really hateful.
‘I remember the words detestable, disgrace, homosexuality, and sinners.
‘I told him that I would bake the cake in the shape of a Bible.’
Now, the bakery has received an official complaint letter from the man via the Department of Regulatory Agencies (DORA).

The man is also threatening that his attorney will file a lawsuit against the bakery. All eyes across the country will be watching these proceedings. This has become one of the hottest debates in the country. If bakers cannot turn down a gay-themed cake since the courts are labeling it discrimination, can they turn down an anti-gay cake?
Endnotes: