BBC ‘Alters’ Munich Killer’s Name Across ALL Media…What Are They Protecting?

The BBC decided it would be a good idea to not report[1] the Munich attacker’s full name. Was this an attempt to scrub any Muslim or Islamic heritage link to its coverage of the incident? What happened to reporting? 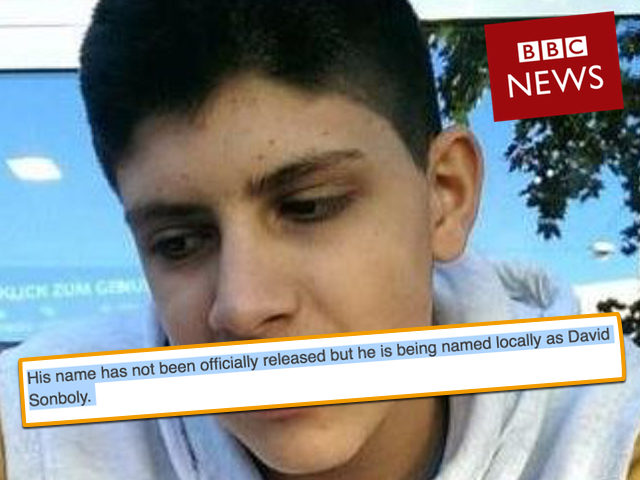 Most sources at this point suggest that Ali David Sonboly – the Munich attacker who targeted children and killed nine yesterday – is not connected to radical Islam, but the BBC has gone to extraordinary lengths to try to keep any reference to his heritage out of its coverage, opting to name him only as “David Sonboly”.

Other news organisations including the Wall Street Journal, Independent, Daily Mail, and Sky News named the attacker as “Ali David Sonboly” or “David Ali Sonboly”. CNN even referred to him simply as “Ali Sonboly”.

ut the BBC had different ideas, opting to refer to him in their online news coverage, national and international broadcast coverage, and on social media (above) as “David Sonboly”.

At 3pm UK time on Saturday, the BBC made reference to the killer as Ali Sonboly. Within one hour however, the BBC had changed its references to the now dead culprit to “David Sonboly”. At 6:31pm, the news bulletin on the BBC News Channel referred to him as “David Sonboly” though at 6:32pm their correspondent in Germany referred to him as “David Ali Sonboly”.

The BBC’s online coverage says, at the time of publication [emphasis added]:

The 18-year-old gunman who killed nine people in Munich was obsessed with mass shootings but had no known links to the Islamic State group, German police say.

Written material on such attacks was found in his room. Munich’s police chief spoke of links to the massacre by Norway’s Anders Behring Breivik.

The gunman, who had dual German-Iranian nationality, later killed himself. His name has not been officially released but he is being named locally as David Sonboly. He had a 9mm Glock pistol and 300 bullets in his rucksack.

Breitbart London has reached out to the BBC for comment, and has asked who took the decision to scrub the name “Ali” from the attacker’s name across all its platforms. We have not yet received a response.

What a laugh… the media all over the world is cutting out clues that trace back to Islam…. the BIG question is, WHY?