BEAT DOWN VIDEO: Woman drags robber out of his car & beats him after he rearended her at the end of a high speed police chase

A robbery suspect appeared to be glad to see police arrive after a chase through North Dallas streets [1]ended with him being beaten by a female motorist whose vehicle he rear-ended. 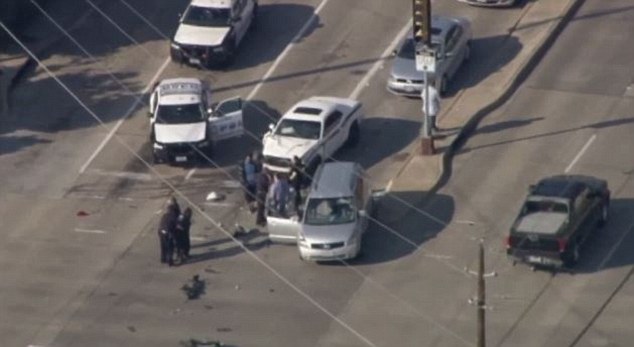 The incident happened about 3:30 p.m. Wednesday when police received a report of a robbery in progress. Police spotted the suspect vehicle and gave chase through North Dallas streets until the car the man was driving slammed into the rear of vehicles stopped at an intersection.

Aerial video showed a woman leaped from a struck minivan, jerked open the driver’s side door of the suspect vehicle, pulled the man from the driver’s seat and began to beat him. With the help of a male bystander, she hurled the suspect to the ground just as officers dashed to her aid.

This footage is crazy… the poor robber will never live down the beating he received from this woman: