Is This the Biggest Pimple Pop Ever? [WARNING: GRAPHIC] [VIDEO]

This video scares me to death. I clicked on it and the music was creepy enough…then you look at what is going down in the video and you wonder why…

Why does something so disgusting mesmerize people. 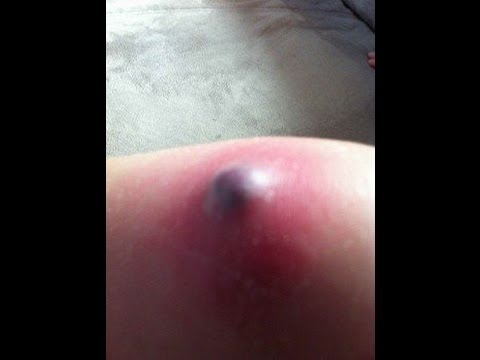 I didn’t know that pimples could get so out of control nasty! How could that be a pimple?? I mean, I guess it could be considered a pimple if the thing was growing on Jabba the Hut! ….if you don’t know who that is, what are you doing with your life?

Seriously though, take a gander for yourself. Are these pimples!?

WOW! None of those were very hygienic now were they? They had their bare hands all over that infected pus, slime, grime or whatever you’d call it. That just doesn’t seem…very safe.

Anyhow, those are not what I’d call pimples as the video suggests, they seem a lot more like boils to me. A boil is not something anyone would want hanging out and chilling anywhere on their body. Trust this!

It’s an infection IN the skin that typically starts out as just a reddened, tender area. If it’s not attended to, over time the area will become firm and increasingly tender as well.

It’s the pus that forms the head and it’s the head that people slice open to squeeze all that nasty junk out.

That ladies and gentlemen is how you get a nice FAT skin abscess for your very own pimple popping YouTube video.