Bill Clinton: ‘You Can’t Have People Walking Around With Guns’

To people like Bill Clinton, Barack Obama, Michael Bloomberg and a variety of other liberals, people walking around armed is a supposedly dangerous situation. However, what these liberal whack-jobs refuse to disclose is that while they seek disarmament for the rest of society, they happily enjoy the safety that comes from being surrounded by a team of men with guns- which is what makes Bill Clinton’s recent comments[1] so enraging: 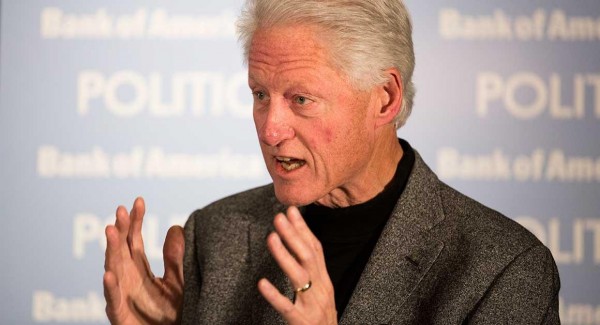 Sunday on CNN’s “State of the Union,” former President Bill Clinton told CNN’s Jake Tapper that the Baltimore and Ferguson civil unrest is a result of too many, “people walking around with guns” combined with a lack of community trust.

Clinton said, “The Baltimore thing came on the heels of what happened in Ferguson, what happened in New York City and all these other places. And there is a big national movement about whether the lives of young African-American men count.”

“You can’t have people walking around with guns. I used to tell people when we did Bosnia, Kosovo anything like that, you get enough people with weapons around and there will be unattended consequences. People make mistakes People do wrong. Things happen. To hold a community together you got to have a high level of community trust.”

It’s funny; modern liberals believe that they get to have a say in who should and should not be armed when, in reality, this issue was decided over 200 years ago. If Clinton needs a refresher on the Second Amendment, I’ll be happy to send him a pocket Constitution. I have plenty.