Black Lives Matter Threatens This If Donald Trump Is Elected 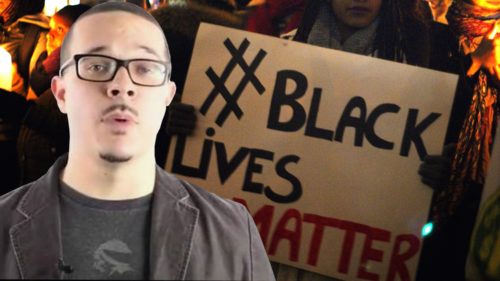 If you are looking for hypocrites[2], look no further than Black Live Matter and their leader Shaun King. While black children in the womb are slaughtered at an alarming rate, and gang violence perpetrated in our cities is taking the lives of young black men at an alarming rate, these people claim to value black lives. Well that rings a bit hollow Mr. King. Until you start valuing black lives yourself, by doing something to stop this slaughter, nothing changes. And now, King is making threats based on if Trump is elected. That’s the way thugs roll. They threaten violence and don’t actually care about lives. But they sure do love publicity and the spotlight, don’t they?

Ever try to prove how peaceful your movement is by threatening a military coup if you don’t get your way? Welcome to the insane world of the Black Lives Matter movement.

They criticize us for saying “All Lives Matter” – yet considering they’ve managed to claim the lives of at least eight police officers in the past two weeks, it should be obvious why we’re reminding them of that fact. It’s not like we’d expect less from a movement that draws inspiration from convicted cop killer Assata Shakur.

As we’re all reading about the three officers who were killed today, BLM leader Shaun King has issued a new threat. As Red Alert Politics reports:

The failed coup in Turkey that killed more than 200 people and wounded thousands more could be coming to America — if Donald Trump is elected and #BlackLivesMatter activist and Daily News columnist Shaun King has his way.

King tweeted this weekend that the U.S. would suffer the same fate as Turkey if the soon-to-be Republican nominee won the presidency.

“If Donald Trump becomes President, you are fooling yourself if you think we’re far from having a coup our own selves,” King tweeted. “I’m dead serious.”

If Donald Trump becomes President, you are fooling yourself if you think we're far from having a coup our own selves. I'm dead serious.

This nation deserves better than violence-preaching thugs who have no respect for the law or the lives of their fellow human beings of any color. For the sake of accuracy, they should change their name to ‘Nothing Matters’. Committing criminal acts makes you part of the problem, BLM, not a part of the solution. Grow up.