Black Pastors From Around the Country Come to Support Trump

For those who believe that Trump-mania may have already subsided, his recent stop in Georgia[1] should prove otherwise. 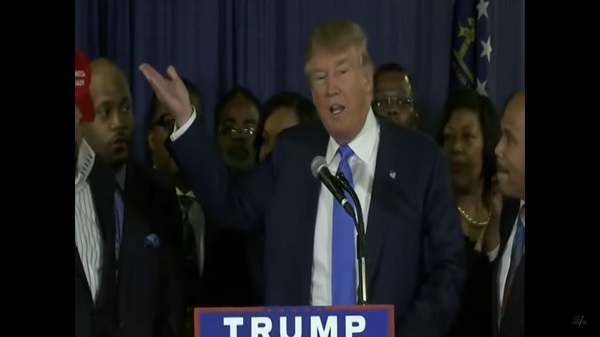 Thousands gathered on Saturday to greet the television star and multi-million dollar business mogul that they hope to see become the next president when he visited metro-Atlanta in his first campaign stop in Georgia.

Before Donald Trump spoke to the crowd, he spoke to the media.  And when he did, he surrounded himself with a very specific group of supporters.

“This is a great group of friends of ours,” he said.

As Donald Trump arrived at his campaign stop in Georgia, he stood with a group of 50 pastors, mostly from African American churches – some from out of state.

“He asked us to come for wisdom; he wanted counsel,” Darryl Scott from New Spirit Revival Center of Cleveland, Ohio said. “And he wanted the hand of God to direct him.”

“No, not at all. We just happened to be in another room and I said come on let’s see the press,” Trump said. “I actually like them much better than the media.”

Outside, hundreds of people lined up around the North Atlanta Trade Center to get an up close and personal spot at the rally.

“I am waiting on Donald Trump to point his finger at Obama and say you’re fired,” Emily Harper said.

But his sights were set on another Democrat.

“We’re going to beat Hillary or whoever it is so badly,” he said.

He told the crowd he wants to grow the U.S. military, provide better support for veterans and build a Trump-sized wall at the border.

Trump also declared he’s ahead in every poll.

Trump had kind words for those that he met in Georgia.

“Well, they are great people,” he said. “I’ve known many of them and they’re just great people.”

He told the crowd he’ll see them again.

“We’ll be back a lot; Atlanta is a special place,” he said. “So many friends.  And we are going to make America great again.”

Trump’s appeal lies in his ability to cut-through the BS and fight back against the constant tide of liberal victories.