Oh come on…are pigs flying? Has hell actually frozen over? No? Then WHY…the hell is HAIR now about racism? This is so ridiculous, I might just be sick over the level of stupid this world has increased to. Black teen gets offended over white dude’s hair…man, get a life.[1] 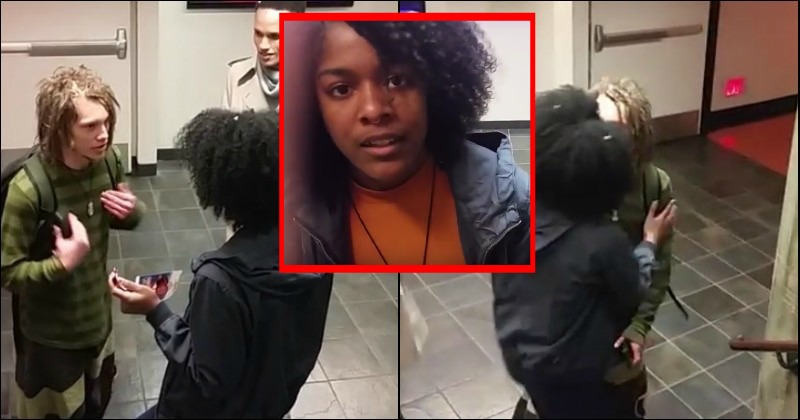 The encounter took place in the Cesar Chavez Student Center, and was captured on video. The video clearly shows a black female student, identified as Bonita Tindle, confronting a dreadlocks-wearing white male named Cory Goldstein. Tindle is accompanied by a black male: both insist to Goldstein that his dreadlocks are tantamount to cultural appropriation.

Goldstein responds by insisting that his look is Egyptian, and doesn’t belong to them. They counter by demanding to know whether he is Egyptian.

“You’re saying I can’t have a hairstyle because of your culture?” asks Goldstein. “Why?”

“Because it’s my culture,” asserts Tindle.

Goldstein eventually says, “You know what, girl, you have no right to tell me what I can and cannot wear.” He then attempts to leave the area. Tindle grabs his arm and physically restrains him. After being pushed around for a few moments, Goldstein separates himself from Tindle and walks off. The self-proclaimed cultural enforcer then notices that she is being recorded by a third-party, and demands to know why.

“For everyone’s safety,” says the person shooting the video.

Tindle then appears to attack the cameraman just before the clip ends.

When I first watched this video, I was suspicious that it was staged: It just seems too ridiculous. But Goldstein posted about it on Facebook and said it really happened. “I just got physically assaulted because I have dreadlocks woe,” he wrote.

So, three words… You Go Boy!