[1]Day One here[2] and here[3], in case you’re joining this melodrama in progress. OK, so Illinois Democratic Gov. Rod Blagojevich is under indictment for trying to sell the Senate seat being vacated by the president elect, and the question now is: What did Obama know, and when did he know it?

Allahpundit has a good rundown[4]: Obama denies[5] having any contact with Blagojevich, an assertion contradicted[6] by Obama’s campaign manager:

But on November 23, 2008, his senior adviser David Axelrod appeared on Fox News Chicago and said something quite different.
While insisting that the President-elect had not expressed a favorite to replace him, and his inclination was to avoid being a “kingmaker,” Axelrod said, “I know he’s talked to the governor and there are a whole range of names many of which have surfaced, and I think he has a fondness for a lot of them.”

So, which is it? Did Obama talk to Blagojevich about his replacement, or didn’t he?
UPDATE I: RiShawn Biddle has a profile of Blagojevich[7]:

After marrying the daughter of a longtime Chicago alderman, Richard Mell, Blagojevich parlayed his father-in-law’s political ties and a squeaky-clean image as a populist reformer into stints in the Illinois House of Representatives and the congressional seat once held by the infamously corrupt Dan Rostenkowski, before placing the governorship into Democratic control for the first time in three decades.

So much for that “squeaky-clean image”! Philip Klein[8]:

Blagojevich’s declaration, recorded by wiretap, that a Senate seat “is a fu–ing valuable thing, you don’t just give it away for nothing,” is sure to enter the political scandal lexicon along with Larry Craig’s “I have a wide stance” and Marion Barry’s “the bitch set me up.”

And then, on December 4, something changed, and that change was the presence of the person referred to in the complaint as “Candidate Five.” If the complaint is correct, in “Candidate Five,” Blagojevich finally found a prospective senator who might come up with money – $500,000 for Blagojevich’s political organization – in return for the Obama seat.

A press leak[10] to the Chicago Tribune Dec. 5 apparently scotched the deal, and York observes:

For anyone who has watched the case, the astonishing thing is that Blagojevich, prior to December 5, could possibly have assumed that he wasn’t under surveillance. But he apparently did, making for some of the juiciest political wiretaps in years. 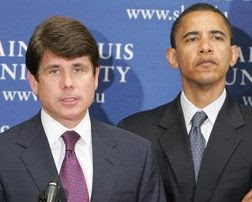 My suggestion: “Who is that man with Obama, and why is he wearing Michael Nesmith’s hair[12]?”

Michelle also has a column today[13] about Nancy “Culture of Corruption” Pelosi:

2008 was the year of Democratic Reps. William “Cold Cash” Jefferson, Charlie “Sweetheart Deals” Rangel, and former Detroit Mayor Kwame “Text Me” Kilpatrick. It was the year Democratic Massachusetts State Senator Dianne Wilkerson got caught stuffing bribes from an FBI informant down her shirt. It was the year 12 Democratic leaders and staffers in Pennsylvania’s state Capitol were stung in a massive corruption scandal involving cash, sex and abuse of public office. And it was the year of multimillion-dollar embezzlement scandals at Democratic satellite offices of ACORN and the SEIU.

Year in, year out, Democrats are more corrupt than Republicans. That’s a fact established to the point of statistical certainty in Donkey Cons: Sex, Crime, and Corruption in the Democratic Party[14], and in the two years since it was published, Democrats have only added more evidence to prove our point.