I hate when a celebrity[1] becomes a liberal just because it’s the popular thing to do. Have a spine, man! 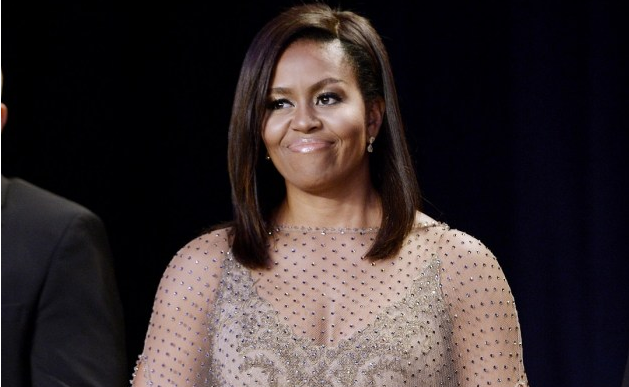 The Voice[3] stage was graced by an extra special guest on Monday evening (May 2), when the First Lady of the United States Michelle Obama[4] stopped by the singing competition.

Joined by Dr. Jill Biden, Obama was on hand to celebrate the fifth anniversary of the Joining Forces initiative, a nationwide program launched in 2011 to honor and support both active and retired military service members and their families. Aligning with the theme, the audience was comprised of American armed forces personnel.

But it wasn’t just the crowd that was excited to see FLOTUS and SLOTUS — the four coaches, Christina Aguilera[5], Blake Shelton[6], Pharrell Williams[7], and Adam Levine[8], were also hyped to welcome Obama and Biden.

“We need some strong female energy! Let’s soak it all in!” Aguilera gushed to Entertainment Tonight before the show. “It’s rare we get that around here,” she added, perhaps a nod to the coaching panel’s perpetual gender imbalance. (Each of the NBC show’s eight seasons have featured panels consisting of three men and one woman.)

Meanwhile, Shelton told ET that he was both impressed and “a little bit nervous” about the ladies’ visit to the set, explaining that it adds increased pressure for his team to perform well. “I don’t even want to talk to [my team] about it,” he joked, “because I’m afraid it’s going to start working on them a little bit.”

However, Shelton’s nerves were likely brushed aside when both women proved themselves to be big fans of the country’s star’s tunes, rattling off a long list of his track titles while his three co-coaches couldn’t name a single song.