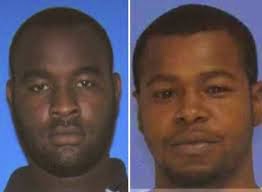 Make no mistake I blame these men and the media for fostering an anti-Cop climate[1] in this country. A false narrative has been purposely put in place that Cops killing Africans Americans with impunity. Many in the Black community believe this lie when the truth is Blacks are killing each other and the media doesn’t highlight it nationally.

The deaths of the officers – the first to hit Hattiesburg in three decades – were felt far and wide in this small southern Mississippi city. Gov. Phil Bryant released a statement saying he was “mourning” the loss of the officer

“This should remind us to thank all law enforcement for their unwavering service to protect and serve. May God keep them all in the hollow of his hand,” Bryant said.

Warren Strain, a spokesman for the Mississippi Department of Public Safety, said Marvin Banks, 29, and Joanie Calloway, 22, were each charged with two counts of capital murder. Banks was also charged with one count of being a felon in possession of a firearm and with grand theft for fleeing in the police cruiser after the shooting, Strain said.

“He absconded with a Hattiesburg police cruiser. He didn’t get very far, three or four blocks and then he ditched that vehicle,” Strain said.