She better drop it if she knows what’s good for her! Doesn’t this crazy Leftist realize she’s living in America? 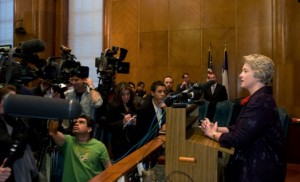 Houston Mayor Annise Parker has announced that she will withdraw the subpoenas against five pastors who have spoken out against the Houston Equal Rights Ordinance, an LGBT city ordinance that some opponents claim would allow men to use women’s public restrooms.

“After much contemplation and discussion, I am directing the city legal department to withdraw the subpoenas issued to the five Houston pastors who delivered the petitions, the anti-HERO petitions, to the city of Houston and who indicated that they were responsible for the overall petition effort,” Parker said during Wednesday’s press conference.[3]

Earlier this month it was revealed that the city of Houston had subpoenaed five pastors regarding a rejected referendum about a recently passed LGBT city ordinance, known by the acronym, HERO.

HERO amended Houston’s Code of Ordinances, prohibiting discrimination in public facilities and private employment on the basis of “protected characteristics.”

This chick needs to re-read the 1st amendment dealing with freedom of religion. Maybe she’s never read it at all.