This is a prime example of how fools are the best advertiser for their own idiocy. Sit back, let them talk themselves into a bouncing ball of “STUPID”[1] and then toss that ball right out. This folks, is what political correctness leads to…a bunch of wasting time liberal protesters that cry over everything and want everyone else to clean their dirty adult diapers, because they are just far too lazy to help themselves. 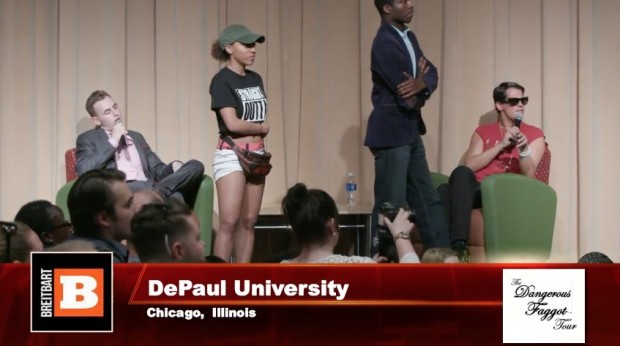 As Yiannopoulos — a senior editor at Breitbart — offered his view on feminism, demonstrators stormed the stage and started shouting “dump the Trump.” The event was hosted by the school’s College Republicans chapter and Yiannopoulos is an outspoken Trump supporter.

Moments later, an unidentified female protester ripped the microphone out of the event moderator’s hands, walked over to Yiannopoulos and shouted, “What do you have got to say?”

Security was called to the scene, but when officers arrived, they only stood by and watched. Eventually Yiannopoulos got word that they would not remove the protesters, despite him saying that one had threatened to physically assault him.

Appalling that @DePaulU[3] security, which I paid for, refused to remove a man from stage who threatened to hit me.

Security did nothing…were they scared? Were they blind, deaf and dumb? Or were they just liberals…and unable to do their job, because that means they have to work.