Blood money: How ISIS is selling human organs harvested from living hostages and its own dead soldiers to fund terror across the Middle East

When is this evil going to be stop? Islamic State has turned its hand to human organ trafficking to fund terror across the Middle East, it has been claimed.[1] 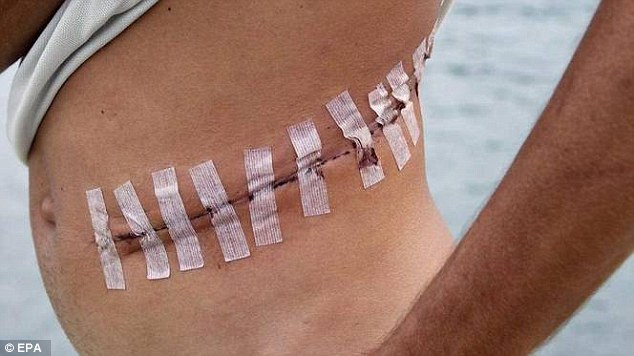 Islamic State has turned its hand to human organ trafficking to fund terror across the Middle East, it has been claimed.
The jihadist group has until now filled its $2million-a-year war chest from a variety of shadowy sources including oil production, human trafficking and drug smuggling.
But it was revealed today that it has been recruiting foreign doctors for months to harvest the internal organs not only from the bodies of their own dead fighters but also from living hostages – including children – snatched from minority communities in Iraq and Syria.
The shocking news was revealed in a report by al-Monitor news website, citing an Iraqi ear, nose and throat doctor named Siruwan al-Mosuli.
He told the site that IS commanders have hired foreign doctors to run an extensive organ trafficking system from a hospital in the captured city of Mosul, northern Iraq, that is already beginning to generate huge profits.
It claims the terror organisation has even set up a specialist organ-smuggling division whose sole responsibility is to sell human hearts, livers and kidneys on the lucrative international black market.
‘[Al-Mosuli] said that lately he noticed unusual movement within medical facilities in Mosul Arab and foreign surgeons were hired, but prohibited from mixing with local doctors,’ the report’s author wrote. ‘Information then leaked about organ selling.’
The report went on: ‘Surgeries take place within a hospital and organs are quickly transported through networks specialized in trafficking human organs. Mosuli said that the organs come from fallen fighters who were quickly transported to the hospital, injured people who were abandoned or individuals who were kidnapped.’
Most of the organs are then smuggled out of Syria and Iraq into neighboring countries like Saudi Arabia or Turkey where criminal gangs sell them on to shady buyers across the globe, the Assyrian International News Agency reported.
While organ harvesting may be the most shocking of IS’ revenue streams, the report highlights a string of others that contribute to the group’s $2million annual income.
One tactic is smuggling families and individuals into other countries. The report highlights one instance when a family paid ISIS over $8,000 per individual to sneak them into Turkey.
Drug smuggling is another. Al Monitor’s report claims that IS traffics Afghan heroin into Europe from the city of Nineveh, which the Russian Federal Drug Control Service (RFDCS) says is generating ‘significant revenues.’
Its drug business has become so successful in recent months that the RFDCS claims that IS now supplies half of Europe’s entire heroin market.
‘The large-scale movement of Afghan heroin acts as an ongoing financial base aiding the functioning of the Islamic State, which secures huge profits by providing half of the total heroin supplied to Europe via destabilized Iraq and some African heroin, which is sent from Iraq to Europe,’ the Russian Federal Drug Control Service issued in a statement.
However, crude oil still remains IS’ biggest earner, pulling in more then $1million per day as it is produced from oil refineries captured in besieged towns.

The Islamic State has proven time and time again the brutality they are capable of. How many lives have to be lost before we will take a more serious approach to ridding the world of this barbaric evil terrorist group?