Bodybuilder Who Ate 10,000 Calories a Day Wastes Away, Dies Of Steroid Abuse

Personal vanity can have devastating effects. Some relentlessly pursue perfection through surgeries and some pursue beauty through vigorous workouts. While working-out can be a great hobby, the sad reality is that too many turn to steroid abuse to achieve the goals they have set and one woman is working to shine a light on this abuse[1] by discussing the tragic demise of her boyfriend from steroid abuse- a man who went from a hulking bodybuilder to a shriveled cancer patient as a result of his abuse. 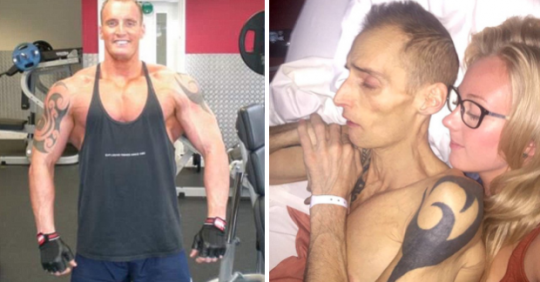 Dean Wharmby was an obsessive bodybuilder and fitness freak who was obsessed with gaining size. In order to obtain the perfect figure Wharmby was pumping himself full of steroids and gorging on junk food. He would also down at least eight cans of energy drink per day.

The coroner said that the anabolic steroid abuse was a ‘direct cause’ of his death. At his inquest Mrs Hashmi said Wharmby’s death should serve as a reminder to people of the dangers of using these types of drugs.

She said: ‘I find on the balance of probabilities that in such a fit, health-conscious young man the most probable cause of his liver tumours was the misuse of anabolic steroids.

She continued ‘To my mind, there is a direct, causal link with Dean’s death. Dean’s death and the precious loss of such a young life in such circumstances ought to send out a very clear message to all those involved in the body building and fitness industries.

‘Use of anabolic steroids, which is apparently rife throughout, is not without inherent risk. I would urge all those using and abusing such drugs to reconsider their position and ask whether it is really worth it given the life-threatening risks.’

The father of one died of liver cancer and left behind his partner Charlotte Rigby and young daughter.

Charlotte told the inquest: ‘Being big was what everyone knew Dean for.

‘I didn’t know the ins and outs, but I knew a lot of people who were using it. It was the done thing because of the benefits people could see with their bodies.’

Dean and Charlotte decided to document his battle with cancer on a Facebook page which they named ‘Dean’s Journey’ which has attracted 10,000 likes. Its so sad scrolling through the different images and watching his gradual deterioration.

Writing on the Facebook page, shortly after he died, Ms Rigby said: ‘I am heartbroken but it was such a release and I felt shortly after that he was no longer in the room.

‘I know that where he is now, he is free, he is amazed, he has shook off all his illness and pain and is pure and perfect and will live forever.’

The results of his steroid use are undeniably impressive, but what does it gain a man to gain such a physique if it threatens to rob him of his life?

This is a tragic tale and one from which we can learn a lesson. There is no easy path to glory or victory, but only hard work. Shortcuts can have devastating consequences.