John Boehner is simply one of the worst Speakers this nation has ever endured. More hostile to conservatives than to far-left liberals, Boehner’s leadership jeopardizes our country more and more each day and his latest slight against conservative efforts[1] to curtail Obama’s powergrabs is simply enraging: 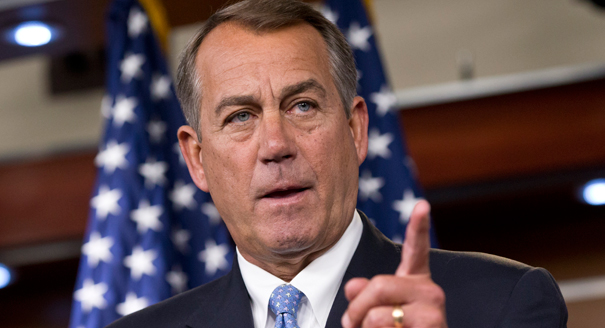 Last week, leadership galvanized Jordan and his allies by refusing to allow Republican amendments to TPA, even as they negotiated with Democrats in an attempt to rally enough votes to make up for the GOP defections. “So, the Democrats basically got to amend the process; we didn’t,” Jordan says. “That’s a frustration that members have, as well.”

Jordan had offered to deliver about two dozen votes for TPA, enough for Republicans to pass the bill without Democratic help, on three conditions: that GOP leadership include an amendment that sets up “checkpoints” at which the Republican conference could decide if the trade agreement proceeds; that they kill a union-friendly job-training program for workers affected by the free-trade deal, which Senate Republicans had backed in order to win Democratic votes; and that Boehner promise not to allow a vote on the reauthorization of the Export-Import Bank. (Jordan wanted Boehner’s word on Ex-Im because Senate Majority Leader Mitch McConnell had promised to allow a vote on the bank’s reauthorization in order to get Democrats to drop their filibuster of the trade package.)

In order to avoid having to send the bill back to the Senate, GOP leadership rebuffed all of Jordan’s demands. “They told us to pound sand, so that’s why we did what we did,” says one Freedom Caucus member who joined the procedural revolt.

There is a war on conservatism and make no mistake: this is a war lead by both Democrats and so-called “Republicans.”