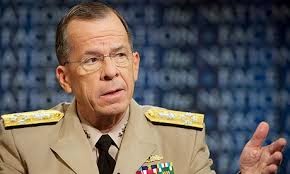 Adm Mike Mullen is a flat out lackey for the Obama regime and is a disgrace to his uniform!

Fox News[1] Army Sgt. Bowe Bergdahl walked away from his base in Afghanistan June 30, 2009, and by December of that same year, the president’s principal military adviser, then-Chairman of the Joint Chiefs Admiral Mike Mullen, knew those details, according to three of Bergdahl’s platoon mates who spoke to Fox News.

“I asked him (Mullen) if he knew about Bergdahl and that he deserted and he (Mullen) told me that he knew of the circumstances surrounding his walking off,” former Sgt. Matt Vierkant told Fox,”(and) that they were developing leads and following leads, trying to do everything they could to get him back.”

After pulling security duty for the chairman, who was doing a swing through Afghanistan in December 2009, Vierkant, along with Evan Buetow and Cody Full, said they met informally with Mullen and about eight other soldiers. After a pep talk about the mission, the three said Mullen asked the squad leaders and platoon leadership to take a break.

“He sat down with all the lower enlisted guys and the team leaders and basically he said, ‘Hey, what do you want to know…You got any questions? He’s like, I’m an open book. Let’s just have a little question and answer session,” Buetow explained.