BOMBSHELL: Ghost from the Clinton’s Past Comes Back to Haunt Them… This Is BAD

The Clinton Presidential campaign is just a ticking time bomb at this point. With the mounting pile of evidence being collected by the FBI as well as the newly acquired evidence that her husband Bill Clinton[1] has been on pedophile Jeffery Epstein’s “Lolita Express” more often than had been previously noted, it appears the campaign is in a perpetual tailspin. 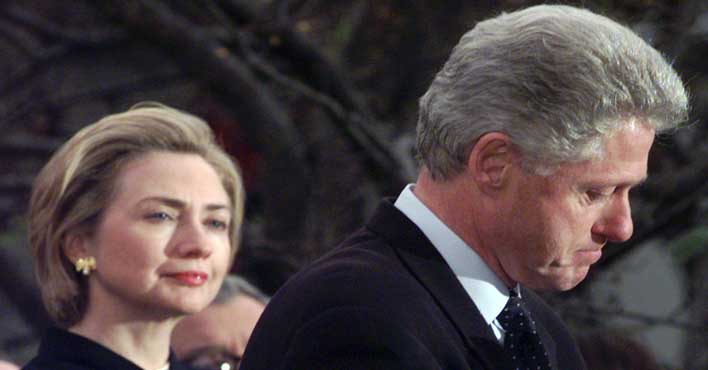 Former President Bill Clinton was a much more frequent flyer on a registered sex offender’s infamous jet than previously reported, with flight logs showing the former president taking at least 26 trips aboard the “Lolita Express” — even apparently ditching his Secret Service detail for at least five of the flights, according to records obtained by FoxNews.com.

Clinton’s presence aboard Jeffrey Epstein’s Boeing 727 on 11 occasions has been reported, but flight logs show the number is more than double that, and trips between 2001 and 2003 included extended junkets around the world with Epstein and fellow passengers identified on manifests by their initials or first names, including “Tatiana.” The tricked-out jet earned its Nabakov-inspired nickname because it was reportedly outfitted with a bed where passengers had group sex with young girls.

“Bill Clinton … associated with a man like Jeffrey Epstein, who everyone in New York, certainly within his inner circles, knew was a pedophile,” said Conchita Sarnoff, of the Washington, D.C. based non-profit Alliance to Rescue Victims of Trafficking, and author of a book[3] on the Epstein case called “TrafficKing.”[4] “Why would a former president associate with a man like that?”

Virginia Roberts, 32, who claims she was pimped out by Epstein at age 15, has previously claimed she saw Clinton at Epstein’s getaway in 2002, but logs do not show Clinton aboard any flights to St. Thomas, the nearest airport capable of accommodating Epstein’s plane. They do show Clinton flying aboard Epstein’s plane to such destinations as Hong Kong, Japan, Singapore, China, Brunei, London, New York, the Azores, Belgium, Norway, Russia and Africa.

Among those regularly traveling with Clinton were Epstein’s associates, New York socialite Ghislaine Maxwell and Epstein’s assistant, Sarah Kellen, both of whom were investigated by the FBI and Palm Beach Police for recruiting girls for Epstein and his friends.

Here is a picture of that flight log and it’s damning: 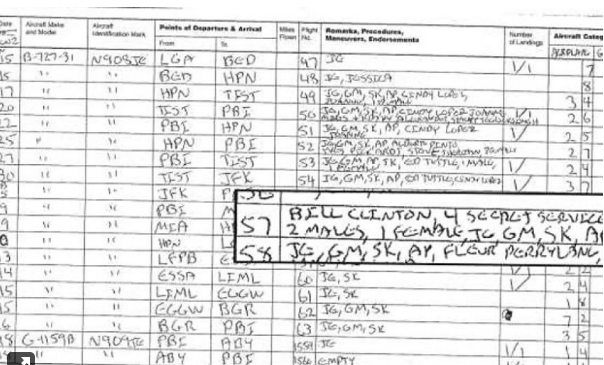 Can we all agree that this man and his criminal wife have NO business in the White House?