In this election nothing would cease to amaze me. We have the state of Utah, a completely red state, polling closer than ever between the two parties. And now we have a state as blue as they come, Pennsylvania, with a new emergence of red votes.

The state is as solid blue as they come, but Secretary of State, Hilary Clinton, has done quite a lot to offend the state. Starting with her declaration to put coal miners out of business. I get what she was saying. She wants to move to alternative energy sources. I get it. BUT in what world does putting an entire industry of workers out of business sound like a good thing to promise blue collared working Americans? And with Pennsylvania, that will make a difference.

Only time will tell, but Hillary Clinton and Donald Trump are definitely shaking things up this year and only November will really tell how it will effect the outcome of this election. Many young voters are feeling displaced and unmotivated to vote given their choices. But others, who have not placed value in voting, are registering in droves. This election will definitely be one for the history books. 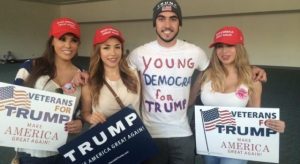 So, what do you think? Does Pennsylvania have a chance to turn red this year? Let us know what you think, especially if you are from that blue state. If ever there was a year to turn things upside down and change the expected outcome of a state, this is that year.

Trump and Hilary have definitely redefined this election. So get out there and vote. Nothing could be more important.