BOOM! Entitled Colin Kaepernick Gets a BRUTAL Taste of Justice

Colin[1] Kaepernick’s decision to kneel during the National Anthem in a pathetic attempt to protest racial inequality in America isn’t going over well with anyone who has values.

While Kaepernick made his statement by kneeling over the past month, two restaurant owners decided to make a statement of their own…they used Kaepernick’s jersey as a doormat.

You know, to wipe the worthless crap off of their shoes, because that’s what Colin’s opinion is to everyone…worthless.

At Krossroads in Virginia Beach, customers are greeted with a red No. 7 jersey when they walk into the restaurant. One such customer, who doesn’t understand freedom of speech and who happens to agree with Kaepernick’s protest, took a picture of the jersey last week and then posted that picture to Facebook along with some scathing comments aimed at the restaurant. 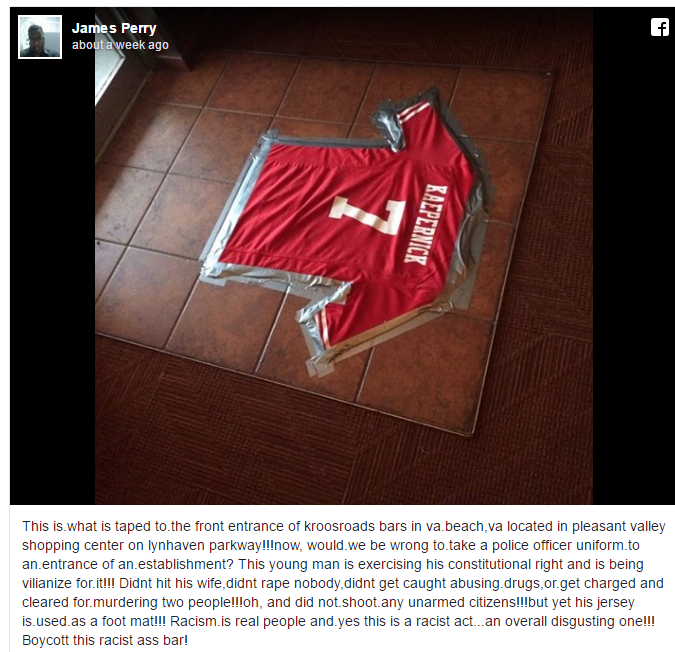 The ignorant customer who posted the picture, James Perry, said that the restaurant is being racist. In the caption posted to Facebook, the man adamantly defends Kaepernick.

The restaurant owner told WTKR.com in Virginia Beach that that doormat has nothing to do with Kaepernick’s race and everything to do with the fact that he feels that Kaepernick is disrespecting the American flag.

The doormat hasn’t exactly been popular with everyone: Dozens of people went on Yelp over the past week and gave the “racist” restaurant a one-star rating, which probably isn’t good for business. 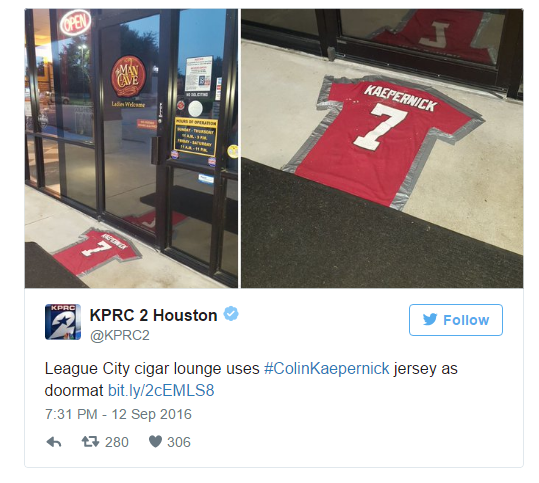 RACIST?! How is this racist? It has nothing to do with racism and everything to do with Colin’s refusal to support the men who fought and died for the country he so freely takes advantage of.

The owner of the cigar lounge told reporters that he plans on keeping the jersey there indefinitely.