You got to love KARMA when is comes around to claim retribution on douchebags like Colin Kaepernick. I am sorry, I am one that normally can find compassion and understanding for others. However this guy? He’s really started something nasty. 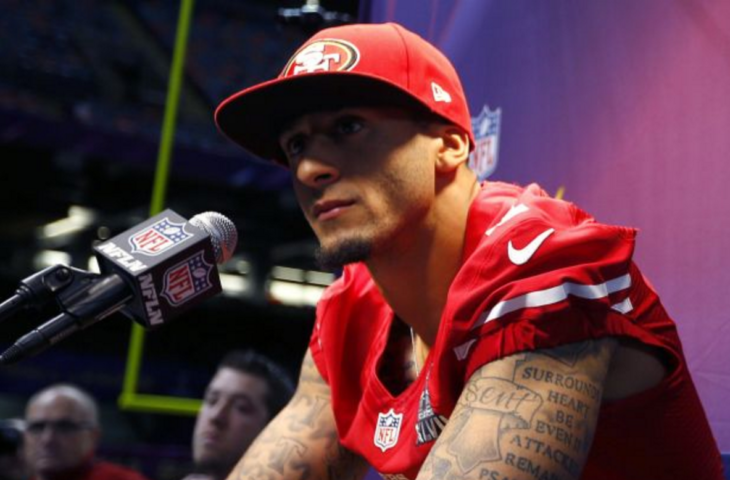 It’s the Kaepernick plague and it’s the icing on Obama’s cake. I’m certain he and Michelle Obama are very proud of themselves.

Kaepernick disrespects the National Anthem, therefore disrespecting America and her heroes. Now high schools have joined in on the madness. Teenagers across the nation are now kneeling down during the National Anthem before their school games. One school in Oakland even took it as far as to lay down on the field with their hands up in the ‘don’t shoot’ position made famous by BlackLivesMatter.

It’s sickening and it’s wrong. These kids aren’t doing this because they believe in the so-called ’cause’ that Kaepernick claims to be doing it for…they are doing it simply because they are teenagers and jumping on that bandwagon is just what they do. He’s famous…and what he had done is getting him a lot of attention, so why not?

What someone needs to teach them is…

Now for the good news. Kaepernick’s disgusting show of disrespect for our National Anthem is not going without consequence…

For the THIRD week in a row, ratings for the NFL network has gone done SUBSTANTIALLY and shows no signs of slowing down.

“I want to say to these guys, ‘If you weren’t playing in the NFL, you would be working at McDonalds,’” he commented. “I think people have had it. Sports used to not be a stage for this, and now it is, so I’m turning it off. I refused to watch the Chicago-Philadelphia game because they were going to protest…You start to figure out you can get along without football, there are other things out there I can do.”

I believe that Obama’s America has forgotten that this is still the land of the brave. Patriots still exist, they may have been silent up until now…but that time is over. A line has been crossed with Colin’s sure sign of disrespect for our nation’s heroes.

Maybe not every American is involved with politics…but the moment you mess with one of our soldiers, you wake the sleeping giant.

Good luck NFL…because you allow people like Kaepernick to do as they please while refusing teams like the Cowboys to honor our fallen blue lives, you’re going to need it.