BOOM! Governor of TEXAS Has 3- CHOICE WORDS for Hillary About Gun Confiscation

Political opportunist extraordinaire Hillary Clinton wasted no time in seizing the recent mass shooting at Umpqua Community College to show just how far she’s willing to go to take OUR guns away[1]. Because… that’s freedom, right? That was sarcasm… but what Texas Republican Gov. Greg Abbott had to say about it…is absolute TRUTH! 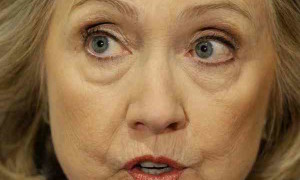 The Democrat presidential hopeful has gone so far as to openly declare her willingness to pursue gun control through executive action — Congress be damned — which is especially bold considering we’re still 15 months out before a new president would even take office. The fact that she’s already PLANNING to act as a monarch, not even pretending to respect our three-branch system of government, should send chills down every republic-loving American’s spine.

Equally frightening is the fact that no options appear to be off the table — not even such a Second Amendment-trampling concept as gun confiscation.

Thankfully, some strong Americans, like Gov. Greg Abbott of Texas, are already standing up and saying NO WAY to even the mere suggestion of this.

As The Blaze reports:

Democratic presidential candidate Hillary Clinton said recently that a gun confiscation program like Australia’s 1996 and 2003 buy-back programs in which the government of that country collected more than half a million banned semi-automatic rifles and other firearms is “worth considering.”

Abbott was referring to a Fox News report on a comment Clinton made Friday during a campaign stop in New Hampshire, where an attendee asked the Democratic presidential candidate about Australia’s gun buy-back program.

“I think it would be worth considering doing it on the national level, if that could be arranged,” Clinton said. The comment came as Clinton continues to try to draw a contrast between herself and fellow Democratic candidate Vermont Sen. Bernie Sanders, who is more lenient when it comes to guns. Sanders and Clinton had a heated exchange on the topic during the first Democratic presidential debate in Las Vegas last week.

A lot of us might have a hard time imagining things could get any worse than President Barack Obama. But Hillary Clinton’s promises — more than 12 months out from the election, no less — to use a pen and a phone to tamp down the Second Amendment are a startling reminder that things can indeed always be worse.

If enough of our populace is naive enough to hand the White House — for a third term — to someone who fancies herself monarch, we’ll need to rely more than ever on the states to stand up and push back against an overreaching federal government. Governor Abbott of Texas shows us how it’s done!