BOOM! Woman Wakes To 3 Armed Burglars Robbing Her – Guess What She Did Next? VIDEO

People always think that bad things happen to “other people.” If we’re lucky, we float through life never having to endure harrowing situations of life and death.

However, too often, “regular” folks become the target of criminals. Citizens are mugged walking down the street; they are awoken by shattering glass as their suburban castle is violated by intruders. While many people throughout the world must suffer at the hands of criminals, Americans enjoy the right to bear arms and are afforded the right to defend themselves. 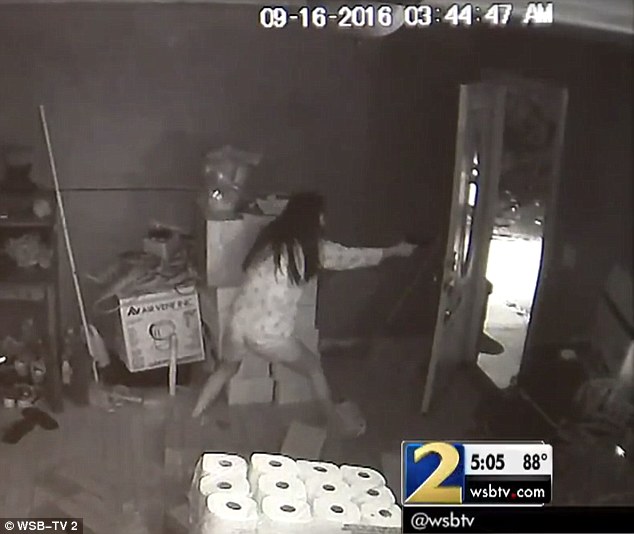 Early Friday morning, three armed men broke into a home in Georgia.[2] A surveillance camera was running and authorities have released the tape to encourage the apprehension of two of the suspects.

In the below footage, the trio breaks into a home filled with boxes. The occupant, a woman who reportedly is a restaurant manager who had stacked supplies for the restaurant in the home, can be seen promptly coming out of the bedroom in her pajamas with guns blazing.

She began firing on the suspects almost immediately and as bullets ripped through the drywall, the robbers returned fire as they ran for their lives.

One man even jumped through a window to escape the barrage of bullets.

The Georgia woman kept firing and firing and even shot as they ran out the front door. One suspect was found dead on the driveway.

After she ran out of ammo, the woman called 911 to report the incident.

Police reported that the woman acted in accordance with the law in that she acted to defend herself and her property.

Two of the suspects remain at large, but they did not cover their faces and it is likely that someone may recognize one or both of the criminals.

The video is an extraordinary example of the importance of the Second Amendment. The left hates the fact that Americans have the right to defend themselves.

Evidently, they would rather this article read, “Innocent woman slain in her home.”