Boss goes undercover, discovers one of his employees is homeless and changes her life! 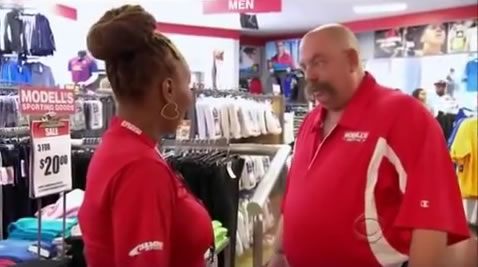 [1]There are some genuinely kind, decent CEOs in the world, and some may actually reach out to individual employees to help them when they see a real need. Mitchell Modell, CEO of Modell’s Sporting Goods, disguised himself as a new hire and filmed himself being trained by an associate named Angel.[2]

She is a hardworking and optimistic woman, but during her final pregnancy, Angel became homeless. Despite this fact, she still found it in her to push others forward, encouraging them to do their best and making them feel good in any way she could.

Her boss, who was undercover visiting his business, Modell’s Sporting Goods, saw that first hand as Angel mentored him for the day… and when he finally heard her testimony something about it hit him hard. That’s when he did something that truly changed her life.

What Modell did for her is amazing and will bring you to tears. It is also fascinating watching him transform from a believable, dumpy looking guy with bad facial hair into the clean-shaven CEO who has it all together. Now, some criticize the video as fake since there seem to be multiple camera angles. Even IF the video is fake, some variation of the story is likely true. Watch the incredible story below.