Boston Bomber’s Mother: America Will Burn in ‘Flames of an Eternal and Terrifying Fire’ for Sentencing Son to Death

Zubeidat Tsarnaeva, the mother of the remaining Boston Marathon bomber Dzhokhar Tsarnaev, says that America will burn in hell for having sentenced her son to death for his role in the terrorist action. According to the Daily Mail:[1] 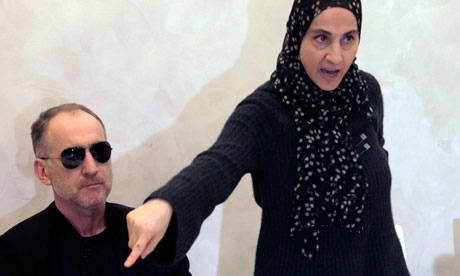 The mother of Boston marathon bomber Dzokhar Tsarnaev has said America will burn in ‘flames of an eternal and terrifying fire’ for sentencing her son to death.

Zubeidat Tsarnaeva reportedly wrote in a WhatsApp message to a supporter that the US ‘think they are killing us and they celebrate this’, according to a text obtained by Vocativ[3].

Tsarnaeva wrote to Zarina Kasenova that it is they will be ‘the ones who will rejoice when Allah grants us the chance to behold’ the U.S. in ‘an otherworldly flame’.

On Friday a jury unanimously voted to punish the 21-year-old with death for his part in detonating two bombs at the 2013 Boston Marathon, killing three people and injuring more than 260 others.

The message was discovered on the ‘Support Dzhokhar Tsarnaev’ group, which is run by a friend of the family, on Russian social media site VKontakt.

Kasenova told Vocativ she was a member of the group because she said she hasn’t seen ‘100 percent proof’ of Tsarnaev’s ‘guilt’ in the bombing that killed three people and injured 260 others.

Tsarnaev’s defense lawyers, who did not dispute that he and his brother Tamerlan carried out the bombings, said he deserved life in prison instead.

The text was revealed just days after Tsarnaev’s family said they plan to appeal the death penalty.

Anzor Tsarnaev told ABC News[4] the family still has hope for his son.

‘What a parent can feel at such moment? It is hard,’he said from Dagestan, Russia. ‘Hope exists always.’

Dzhokhar Tsarnaev’s aunt, Maret Tsarnaeva, said she was not surprised that her nephew received the death sentence but that the punishment doesn’t matter because she believes the family will prove he is not guilty.

But Tsarnaev’s mother has by far been the most outspoken of her belief that her son is innocent.

After Tsarnaev was found guilty of the bombings in April, Zubiedat told a supporter through WhatsApp that her sons were the ‘best of the best’ and that America ‘is the real terrorist’.

On Sunday Russia-backed Chechen leader Ramzan Kadyrov wrote in a post on Instagram that he believed the US was behind the Boston bombings and had made Tsarnaev, who is of Chechen descent, a scapegoat of the West.

Kadyrov made the post on social media on Sunday, two days after Tsarnaev was sentenced for death for detonating two homemade pressure-cooker bombs near the Boston Marathon finish line in April 2013.

Heavily implying that the US had hand in terrorist attacks around the globe Kadyrov said: ‘If they [Tsarnaev and Tamerlan] actually did that attack, I don’t believe the US special intelligence services didn’t know about it.’

Yeah, yeah, yeah- this is the standard “false flag” cries that occur whenever the U.S. encounters unspeakable evil.

Tsarnaev is guilty, was found guilty and, unfortunately, is more likely to die of old age on detah row than from lethal injection.