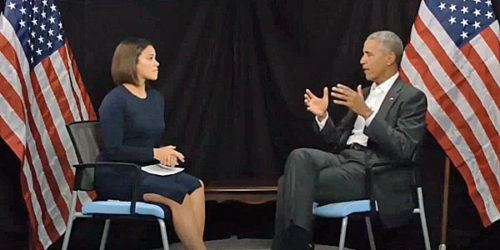 When Democrats tell us they are against voter ID, it’s not because some people will be disenfranchised. It is to enable exactly what the President is urging in the video below. Obama told illegals to vote[2]. As if that is somehow NOT illegal. And let’s ask ourselves for whom are these illegal aliens likely to vote? Yes, Democrats; the party of lawbreakers. Democrats believe they are above the law and that their voters are too.

In the video, the interviewer, Gina Rodriguez says: “Many of the millennials, dreamers, undocumented citizens — and I call them citizens because they contribute to this country — are fearful of voting. So if I vote, will immigration know where I live — will they come for my family and deport us?”

Obama responds: “Not true. And the reason is — first of all — when you vote you are a citizen yourself and there is not a situation where the voting rolls somehow are transferred over and people start investigating, etc.”

Hello, is anybody home? “Undocumented” people are NOT US citizens and are therefore not eligible to vote in US elections. Only CITIZENS get to pick the next President, not people here illegally. Go ahead, try voting in Mexico as an undocumented resident, see what happens. It won’t be pretty. 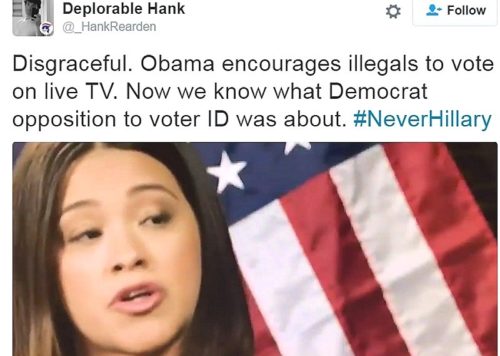 America, we must drain the swamp. We have a sitting President actively telling illegals to vote; that voting ‘makes them a citizen’. Wrong. What makes you a citizen is being born here or going through the legal citizenship process like generations of immigrants have done before. We do not vote so we can ‘become’ citizens, we get to vote because we ARE already citizens. Voting is not a path to citizenship for illegals, it is the high privilege of those who are already legal. No Gina, you cannot vote if you are not legally here as a citizen. But feel free to start down the path of becoming a citizen and vote when it is completed.

We need a president who will get the border under control and stop this illegal influence on American elections. We need Trump.