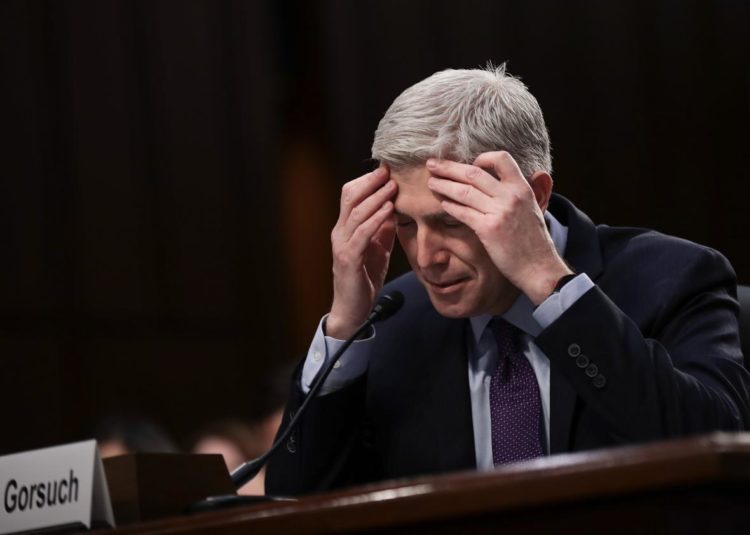 Standing next to a blown-up version of the U.S. Constitution, Democrat Senator Jeff Merkley finally yielded the floor this morning after a 15 hour filibuster. All-nighters are usually reserved for college kids cramming for an exam, but the adult Senator Merkley went childish to protest the latest right-wing bogeyman, Supreme Court Nominee Neil Gorsuch.

This comes days after two respected Senate Democrats broke from Chuck Schumer to confirm that they would both be voting to confirm[2] the Judge.

Merkley began his grand gesture to stop Gorsuch’s confirmation last night around 7:00 pm, when most Americans were tuning into the Yankees at the Rays and lasted until this morning.

His initial tweet announcing his intent didn’t go far into the reasons why he would undertake such a mission.

"I plan to keep speaking for quite a while longer, as long as I'm able" #StopGorsuch[3] #HoldTheFloor[4]

But, once on the floor, he spoke brilliantly, passionately of the alarming reason for his filibuster:

Sen. Merkley assured us that it’s important to block Judge Neil Gorsuch because reasons and it’s definitely not sour grapes. Sure, he’s saying that he was protesting the Republican’s decision last year to block the nomination of Obama’s Supreme Court pick, Merrick Garland. Clearly the lack of sleep impacted his ability to express himself, because instead of giving us clear reasons to block Gorsuch, he went digging for brownie points from the simple fact that he filibustered:

“Such a theft never, ever has happened in the history of our nation,” he added. “If you can steal one seat and get away with it, the temptation next time is to steal another seat.”

Yes, Merkley, the Supreme Court seat was stolen from you. You can go back to sleep now.