Whether conservatives ought to support Donald Trump is a matter for each man or woman to decide for themselves. For many, Trump represents a certain grit in American politics that has been severely lacking in the GOP in recent decades and because of this, any gaps in The Donald’s conservative ideology can be dismissed as unimportant relative to the paradigm shift he represents. 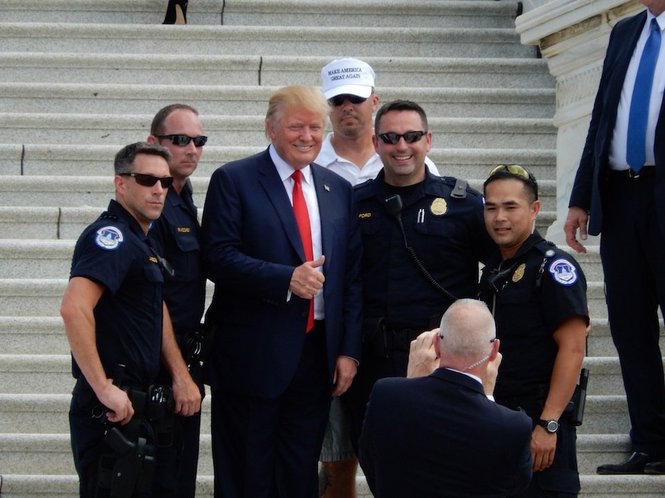 For others who may be more policy-oriented, Trump’s conservative credentials are up for debate and some purists are inclined to believe that they should not (yet again) be lured into voting for “the lesser of two evils.”

In truth, both perspectives are valid. Few conservatives should be able to say with a straight face that Donald Trump is the embodiment of conservative ideology, but even fewer would be able to assert that Hillary Clinton would be anything short of an absolute disaster for this country.

However one feels about Trump’s policies, however, one thing is clear: he loves this country and his opponent does not.

Through all of his faults, Trump fights for an idea of America that Hillary and her “progressive” cohorts seek to destroy once and for all. One of these pillars of our society she seeks to destroy is respect for police officers.

By siding with the domestic terrorist group Black Lives Matter, Hillary has made it clear where she stands on those who serve and protect.

Therefore, it is little wonder why the nation’s largest police union has enthusiastically endorsed Donald Trump for the presidency.[2]

The Fraternal Order of Police (FOP) endorsed Trump on Friday, providing a big win for the 2016 candidate.

“[Trump] has seriously looked at the issues facing law enforcement today. He understands and supports our priorities and our members believe he will make America safe again,” said Chuck Canterbury, the FOP’s national president.

“He’s made a real commitment to America’s law enforcement and we’re proud to make a commitment to him and his campaign by endorsing his candidacy today.”

With Hillary courting far-left labor unions, Trump’s campaign set their sights on swaying police officers. “I’m on your side 1,000 percent,” Trump told[3] an FOP chapter in North Carolina in August. “What you do is incredible.”

While this is great news for Trump, it is hardly surprising; his opponent is a vehemently anti-American radical who is an unindicted felon – hardly the candidate one would think police officers would favor.

The @GLFOP[4] has made an endorsement for President of the United States. pic.twitter.com/L5ydPsNauI[5]