Congressional Republicans were poised Thursday to notch the grandaddy of all conservative wins[1] — passage of a bill that would deliver a “mortal wound” to Obamacare. A swift kick to Obamacare as promised to voters, when the control of Capital Hill was passed to them. 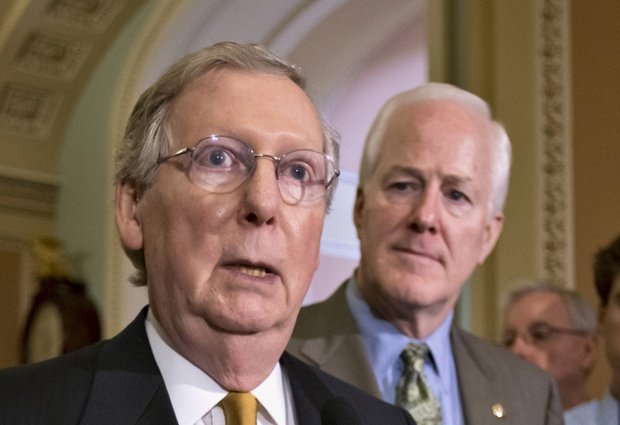 Though destined for a swift veto, the GOP views the fast-track process as a test run for the real thing in 2017, when it hopes to scrap the health law with a Republican president and a slim majority in the Senate.

Party leaders also said the bill, while doomed, fulfills a promise they made to voters who handed them control of Capitol Hill in last year’s mid-term elections.

“Are we doing this for partisan reasons? I would say no, absolutely not,” Sen. John Cornyn, Texas Republican, said. “What we are doing is listening to our constituents, who’ve told us that they’ve had one bad experience after another with Obamacare.”

Republicans are using a budget process known as “reconciliation” that allows them to pass a revenue-related bill by a majority vote, without having to overcome Democratic-led filibusters that have doomed every previous Obamacare repeal.

The bill also strips federal funding from Planned Parenthood for one year in the wake of videos showing organization officials negotiating the sale of fetal body parts.

A final vote was expected late Thursday after the Senate first dealt with a series of amendments, including one from Republicans that would restore health plans that consumers lost when the Affordable Care Act took full effect in 2014 — a direct rebuke to Mr. Obama’s flawed promise that people who liked their plans could keep them under his law.

Democrats will try to extract a political price along the way. They hope to force votes on women’s health and gun-control measures in the wake of two mass shootings — one at a Colorado branch of Planned Parenthood that killed three, and the other at a holiday party in California that killed 14.

“Democrats are focused on doing something to stop the gun violence, and we will force amendment votes to that end today,” Senate Minority Leader Harry Reid, Nevada Democrat, said. “We are going to vote on expanded background checks. We are going to vote to prevent criminals convicted of harassing women’s health clinics from owning weapons. Shouldn’t we do that at least?”

Though the provisions won’t become law, the roll call will allow Democrats to run 2016 campaign ads attacking vulnerable Senate Republicans for how they voted.

GOP leaders have had to tailor the reconciliation bill to get majority support from their own party. A beefed-up version of the House-passed bill would phase out the law’s exchange subsidies for private plans and the expansion of Medicaid in select states.

That was designed to win backing of Sens. Ted Cruz of Texas, Marco Rubio of Florida and Mike Lee of Utah, who it wasn’t enough to just scrap the law’s insurance mandates on individuals and employers and its taxes on medical device sales and generous employer plans.

Democrats said some Senate Republicans will face retribution from voters.

Eleven GOP senators up for reelection in 2016 represent states that have expanded Medicaid, and that coverage would be phased out under the Republican proposal over the next two years.

Democrats also told the GOP to leave Planned Parenthood alone. It is already unlawful to spend federal funds on abortion, so Republicans were taking away a range of health services as part of its bid to topple the organization, according to Sen. Elizabeth Warren, Massachusetts Democrats.

Too little too late…by the do-nothings in Congress…this nugget sized so called promise kept to voters, is not going to restore the people’s faith in them. If that’s what they are after…they need to go bigger.