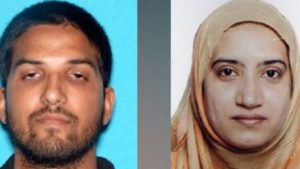 [1]The corrupt media machine is attempting to explain away this Islamic terrorist attack as a isolated incident. It was just a good guy that was radicalized by his wife. Don’t fall for the diversion because in the final analysis ISIS is the core issue that either directly controls or indirectly influences people to murder others. I don’t care if she radicalized him or the other way around. ISIS is a danger to the country much more than climate change and we need to deal with it in a real instead of phony way.

CNN[2] – ISIS on Saturday hailed the two people who massacred 14 people in Southern California this week as “supporters” of the terror group — a message that came after U.S. investigators said they suspect one of the shooters professed loyalty to the Islamist network.

The terror group’s official Iraq-based station made the declaration days after Wednesday’s San Bernardino shooting that also left 21 injured, but — notable for a group quick to claim attacks — did not say the couple were members or that ISIS was responsible.

Tashfeen Malik[3] and her husband, Syed Rizwan Farook[4], sprayed bullets at Farook’s co-workers at a holiday party for the environmental health department in San Bernardino before being gunned down in a shootout with authorities the same day.

“We pray to God to accept them as martyrs,” ISIS’ al-Bayan Radio declared Saturday.