There’s a rumbling danger that continues to approach us…it is the inevitable battle that will be upon us between Republicans and Democrats if Obama and his new executive order on “Gun Control”[1] last long enough to see daylight…and with him being so fierce about it, it may be sooner than we think. 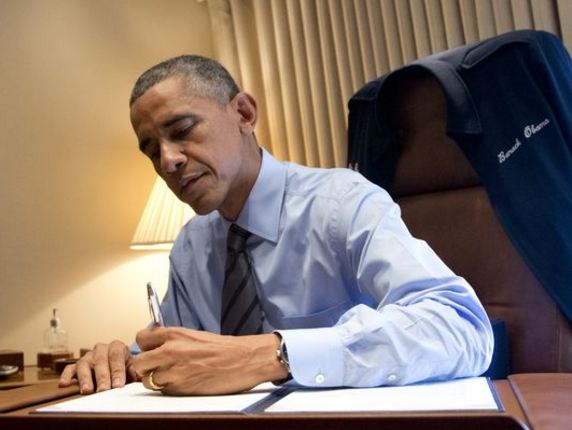 The White House is finalizing a new executive action that would expand background checks on gun purchases, according to one of President Obama’s top aides.

Senior adviser Valerie Jarrett said Wednesday the president has asked his team to send him a completed plan “in short order,” according to The Associated Press. She spoke at a vigil for victims of the 2012 shooting in Newtown, Conn., that left 28 dead.

White House press secretary Josh Earnest on Thursday refused to elaborate on the timeline to issue the unilateral proposals.

“At this point, I still don’t have an update on the progress the administration is making on scrubbing the rules,” Earnest told reporters at his daily press briefing.

Still, Jarrett’s comments are an indication that Obama could soon roll out a proposal that would set up a major battle with Republicans in Congress and gun rights groups.

Stymied by Congress on new gun control measures, Obama has been weighing a number of executive actions on guns following an October mass shooting at an Oregon community college.

The effort took on even more urgency after last month’s attack in San Bernardino, Calif., which left 14 dead.

Obama has been holding meetings with gun control advocates to gauge their support and solicit ideas. He met last Friday with former Rep. Gabrielle Giffords (D-Ariz.), who survived a gunshot to the head during a 2011 mass shooting in Tucson.

A proposal Obama is reportedly considering would classify more sellers as high-volume dealers, which would close a legal loophole that allows many sales conducted online or at gun shows to skirt existing background check provisions.

But such a measure would surely prompt a legal challenge from gun rights groups, which say Obama lacks the authority to tighten background checks alone. The National Rifle Association and GOP lawmakers have blasted the idea as executive overreach.

If we are divided now, I can’t imagine what it will be like when Obama and his Executive “Gun Control” Order starts knocking at our doors for our guns.